No damage to artwork at National Gallery in fire 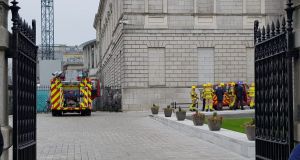 The National Gallery of Ireland in Dublin was evacuated on Wednesday after a fire broke out. 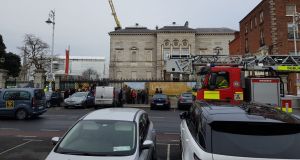 The National Gallery of Ireland in Dublin was evacuated on Wednesday after a fire broke out.

The National Gallery of Ireland in Dublin has said no damage was caused to any of its artwork by an electrical fire on Wednesday.

The gallery, which is located on Merrion Sq, has reopened after it was evacuated due to the fire which broke out in a server room.

Dublin Fire Brigade said it received a call from the gallery at 2.02pm to notify it of the fire.

Three pumps, a turntable ladder and a district officer were dispatched to the scene and arrived at 2.06pm.

The fire was extinguished but officers in breathing apparatus were forced to use pressure ventilating fans to clear smoke.

The Gallery has now reopened - thank you for your patience!

Dublin Fire Brigade tweeted that three engines from Tara and Donnybrook stations were sent to the scene.

The brigade said there were no injuries.

In a statement to The Irish Times, the gallery said there had been no damage to any of the artwork.

“The National Gallery of Ireland dealt with a minor isolated electrical fire in a secure non-gallery space this afternoon,” it said.

“Our fire suppression systems operated effectively and contained the fire with the swift assistance of Dublin Fire Brigade.

“All gallery visitors and staff were quickly and safely evacuated and we are grateful to visitors for their cooperation. This happened between 1.55pm and 2.50pm today.

“The gallery has reopened to the public and we regret any inconvenience caused to visitors during this time. There was no harm caused to staff, the public or the collection. All gallery operations have resumed normal service.”