Review into overruns at children’s hospital to cost €450,000 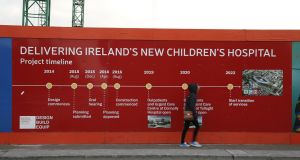 An independent review into the runaway cost of the new national children’s hospital will itself cost €450,000, the Oireachtas health committee has heard.

The review by consultants PWC began this week and will be completed by March, HSE assistant director general Dean Sullivan told the committee.

Consultants will look at the factors that contributed to the escalation in cost of the project at St James’s Hospital - which is now projected to cost €1.7 billion - so that any “potential weaknesses” can be identified and resolved, Mr Sullivan said.

Monthly reports sent by the design team to the board overseeing construction said the project was on budget up to the middle of 2018, TDs were told.

John Pollock, project director of the National Paediatric Hospital Development Board, said that with the exception of an additional €60 million required for additional sprinklers and fire safety measures, the board was told the project was on budget.

In April 2016, Taoiseach Leo Varadkar said the total cost of the project would be €650 million, including two satellite clinics, paying Vat, and contingency for inflation and unforeseen events, Fianna Fail health spokesman Stephen Donnelly pointed out.

Last December, The Irish Times revealed the total cost of the project has increased to at least €1.73 billion.

In November, the development board informed the HSE and the Department that the cost of constructing the hospital had risen to €1.43 billion, she said.

Mr Donnelly said Irish taxpayers would be paying over twice as much per bed for the hospital than it was costing to build the most expensive hospitals in the world, the Royal Adelaide in Australia and the Karolinska in Sweden.

He asked Ms Conroy to agreed that there has been a “catastrophic failure of management” of the project.

Ms Conroy told Mr Donnelly that she did not accept this.

She said that while the cost was at the higher end, at €6,500 per sq m, it matched international norms.

“At every stage in this process, the department and the HSE were operating in approved budget limits, approved by Governments at each stage.”