Two further Covid breaches committed by US troops at Shannon

Minister says he has ‘received apologies, both orally and in writing’ from US authorities 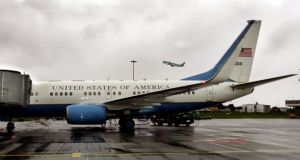 Two further incidents have been confirmed of US troops breaching Covid-19 regulations after landing at Shannon airport.

Earlier this month, Minister for Foreign Affairs Simon Coveney disclosed that 48 US military personnel and five crew breached Covid-19 regulations when not presenting evidence of negative PCR tests nor completing passenger location forms after landing at Shannon airport from Bahrain on January 25th.

Those troops and crew stayed in a Limerick hotel overnight, leaving at one point to buy food, before flying on to the US the following day.

The Minister said the troops concerned were operating in a “clean bubble”, and were tested repeatedly during the period they were deployed in the location where the flight had originated.

Now, Mr Coveney has revealed two separate breaches involving 113 US personnel on two other flights from two other dates in January prior to the first reported breach.

In a written Dáil response to Sinn Féin Wicklow TD John Brady, Mr Coveney said gardaí had brought his attention the additional breaches. The first was on January 11th when 59 US military personnel alighted at Shannon airport where they did not complete passenger locator forms.

On January 23rd, 54 personnel landed at Shannon who did not present negative PCR tests nor complete passenger locator forms.

Mr Coveney said: “The US authorities have assured me that they take Irish public health requirements very seriously. I have received apologies, both orally and in writing, from the relevant US authorities, including the US military authorities. The US side has recommitted to full compliance in respect of future landings.”