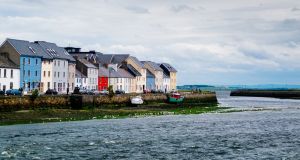 Galway city has the highest rate of Covid-19 in the country, with a 14-day incidence rate that is almost six times higher than the national average, according to the latest figures.

This is almost six times the average rate for the State which stands at 240.4 per 100,000 for the same time period.

The data is published on the Government’s Covid-19 Data Hub every Thursday night. Here, we put the figures in a searchable table so you can check your area and compare it to other local electoral areas in the Republic. If you are reading this on The Irish Times app, go here to search.

It is the second week in a row that Galway city has had the highest rate of infection in the State. It has been blamed on an outbreak among third-level students despite the fact that the local university, NUI Galway, is closed at present.

On February 14th, the Health Service Executive’s director of public health in the west, Dr Breda Smyth, warned the nature of transmission means many students may have been exposed to the virus.

The second highest level of infection in the State is in the Ballymun-Finglas local authority area which had a 14-day incidence rate of 798 per 100,000. It recorded 439 infections between February 9th and 22nd.

The third highest rate is in Tullamore where 162 cases were recorded between February 9th and 22nd. It may be linked to a significant outbreak of Covid-19 at the Nelipak Healthcare Packaging plant in Clara. The factory has since been reopened after a deep clean.

The local authority area with the fourth highest rate of Covid-19 is Tallaght South which had a rate of 555.5 per 100,000 between February 9th and 22nd.

The best performing area is Chorca Dhuibhne on the Dingle peninsula in Co Kerry. It did not register a figure between February 9th and 22nd as it recorded less than five cases.