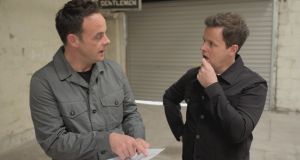 Anthony McPartlin and Declan Donnelly spent a portion of this summer and the summer of 2017 drawing their respective family trees in the midlands and in Cork.

The tragic Irish roots of UK television presenters Ant and Dec will be revealed in a two-part programme to be aired on ITV this weekend.

Anthony McPartlin and Declan Donnelly spent a portion of this summer and the summer of 2017 drawing their respective family trees in the midlands and in Cork and while their Irish connections came as no surprise to the pair, some of the details left at least one of them reeling.

Asked why he had taken part in the programme, McPartlin said he had done so because there “was great intrigue” about “Nana Kitty”.

He was able to trace his father’s side of his extended family to Leitrim without much difficulty but his mother’s back story had proved to be more problematic.

On numerous occasions over many years he and his mother had tried to find out some details of his grandmother Kitty’s past but always drew a blank, at least until last July.

The presenter was left visibly shaken after the programme makers behind Ant & Dec’s DNA Journey uncovered the grim details surrounding her early years in Ireland.

The snippets of information McPartlin’s family had been able to glean included the fact that Kitty was born in Fermoy and that her mother had died while giving birth to her. Only one of those things proved to be accurate.

The family also knew that Kitty’s brother Michael had been sent to live in Canada when she was very young after which she was shipped off to England at the age of just 12 or 13.

During the last days of filming in Ireland, the award-winning TV host was told that much of what he thought he knew was wrong.

A DNA cousin match had been found in Fermoy and that this cousin was the key to unlocking this family mystery.

“The trail runs cold [after] one generation and nobody knows anything really,” the presenter said before the meeting. “What’s myth, what’s legend, what’s the truth?”

Details of McPartlin’s past were uncovered by genealogist Ann-Marie Coghlan who informed them that whilst his family tree stopped at Kitty, a close DNA match to McPartlin revealed that he was related to a Barbara Llewellyn and it was Barbara’s family tree that helped solve the mystery.

Shown a marriage certificate, Ms Coughlan was able to establish “some sort of a connection with a lady called Mary Llewellyn and she married a local man called Thomas McGrath”.

“So that’s my great grandparents. That’s fantastic I didn’t think we’d get anything like this, this is wonderful,” he said.

But there was more.

The genealogist then showed him a copy of his family tree and it emerged that his grandmother’s mother did not die in childbirth but in 1920 when Kitty was two-years-old.

“What happened was Mary actually died of tuberculosis. It was the shame of the family so it would be concealed in the records. It’s very, very sad,” Ms Coughlan said.

His grandmother’s brother who he though had emigrated to Canada had not been so lucky.

“Sadly this is another sad part,” Ms Coughlan said. “We actually found Michael and he died when he was eight years old. And he died here in Fermoy. He died of whooping cough.”

When asked why his great grandmother had told everyone her brother had gone to Canada or America, the Genealogist speculated.

“She was a very little girl when Michael died, she would have been about six, so it is possible the family didn’t want to break the news to her of the death of her brother, so they made up a story that he’d gone away and emigrated.”