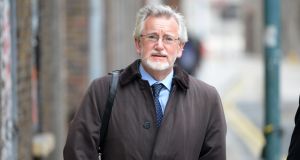 In the austere, somewhat characterless hearing room of the Solicitors Disciplinary Tribunal in Dublin, barrister Neasa Bird sat at a table and leant forward, occasionally resting her head in her hand as she read a list that seemed to be without end.

Behind her to her left sat the Ballaghaderreen solicitor Declan O’Callaghan who, after years of obfuscation and prevarication, had finally admitted to professional misconduct.

If O’Callaghan was troubled by the implosion of what was left of his reputation, he did not show it. Looking dapper, well-groomed and relaxed, he spent much time examining the room’s upper walls and ceiling which, like his expression, were blank.

A bare few days before last week’s hearing of a complaint against him, levelled first by another Roscommon solicitor and then taken up by the Law Society, O’Callaghan had finally admitted to professional misconduct. Simply put, he held on to money that was not his, apparently dipping into it for uses that were not revealed.

For most of the past two years, O’Callaghan denied the import of all allegations against him: he had done nothing wrong, he maintained. There had been delays settling client accounts yes, misunderstandings perhaps, quibbles over costs and expenses, of course . . . but nothing actually wrong.

Now, however, that was all gone: since 2014, persistently and illegally as his barrister, Michael Mullooly, acknowledged, O’Callaghan had held on to €17,250 that did not belong to him, money he was professionally and morally obliged to give to another solicitor. Further, he had not reimbursed the other solicitor the €7,125 that solicitor had been forced to spend chasing O’Callaghan for the money.

Since a storm of allegations broke over O’Callaghan’s head in early 2018, he has been shown to have had a tried and tested modus operandi – he simply took clients’ money without their knowledge or permission, spent it as he saw fit, while also grossly inflating his fees and simultaneously lying about it.

His victims were often the elderly, the estates of the deceased, or people left bequests who were unfamiliar with the law – rural folk uncomfortable at drawing undue attention to themselves and unwilling to ask probing questions of a pillar of their community.

In 1990, the High Court had curtailed O’Callaghan’s legal career, directing that for three years he could practice only under the supervision of a more experienced solicitor

At Tuesday’s hearing what shocked was not the case before the tribunal, or others of more recent vintage reported in The Irish Times or recounted to the High Court. What shocked was the detailing of O’Callaghan’s more distant past, what Ms Bird, representing the Law Society, told the tribunal was his “previous disciplinary history”.

In 1990, the High Court had curtailed O’Callaghan’s legal career, directing that for three years he could practise only under the supervision of a more experienced solicitor.

At that early stage of his career, the Law Society (the solicitors’ professional and representative body) had discovered there were irregularities in how O’Callaghan had been operating his client account. This is the repository of money belonging to clients that all solicitors hold on trust for them, while carrying out their instructions. Typically, such funds may be related to a will or a property sale.

At Tuesday’s hearing, Ms Bird laid out plainly, enumerating through the alphabet, a relentless litany of theft, fraud, forgery and lying – the conduct that led to O’Callaghan’s professional curtailment. It was a catalogue of behaviour that might have been expected to be of interest to gardaí, had they known.

The findings of the previous inquiry were, said Ms Bird, that O’Callaghan (a) created a deficit in a client’s account in the sum of £8,712 on April 13th, 1989; (b) improperly and knowingly applied client’s money for personal benefit, namely in respect of (i) the purchase of a private dwelling residence, (ii) the making of repayments to a building society, (iii) purchase of a motor car; (c) created debit balances on a client account in his practice; (d) failed to lodge client’s money; (e) made false entries in the ledger account of a client, John Garr, indicating that Mr Garr had been given £6,000; (f) prepared two false acknowledgment receipts for £3,000 in respect of Mr Garr and placed them on the account with the intention to mislead; (g) prepared a false letter, dated January 11th, 1988, and placed it on the same file of Mr Garr with the intention to mislead; (h) made a false entry in Mr Garr’s ledger account, forged two receipts with the intention of misleading the Law Society’s investigating accountant of the society; (i) made false representations to mislead the accountant . . .

The inquiry found further that O’Callaghan had (j) made false representations about the affairs of another of his clients, a Ms O’Neill, by (k) concocting notes of fake phone negotiations with the Hibernian Insurance Company; and (l) making fake attendance notes at meetings, with the intention of misrepresenting the true state of Ms O’Neill’s affairs; (m) made a false entry in Ms O’Neill’s account that £2,500 had come from Hibernian; (n) failed to tell Ms O’Neill the true state of her legal affairs; and (o) failed to tell her the correct amount of her settlement and all deductions there from.

O’Callaghan had (p) made false representations to another client, a Miss H Gill, that her case was settled for £5,000 included general damages and special damages and costs, when the settlement figure of £5,000 did not include costs, thereby (q) misleading Ms Gill as to the true position of costs in her action; had (r) made false statements in writing about the legal affairs of another client, a Damian O’Reilly, to his doctor and hospital; (s) made false statements in writing to the consultant with the intention of deceiving him of the true state of affairs.

Ms Bird said that O’Callaghan had (t) acted in a manner contrary to his undertaking given to AIB given in respect of his private residence; (u) allowed charges to be debited to his client; (v) failed to advise clients of their entitlement to taxation in respect of solicitor client charges; (w) failed to designate a client’s deposit accounts as a client account; and beginning to run out of letters of the alphabet, Ms Bird concluded the list with the letter (x) saying the 1990 inquiry found that only the year before, O’Callaghan had “not retained intact” a client’s deposit until the closing of a sale.

There were three members of the 1990 committee of inquiry but, despite what they discovered, only one of them felt O’Callaghan’s behaviour made him unfit to be a solicitor and that he should be barred from the profession permanently.

The other two recommended, and the High Court accepted, that he be allowed continue in practice, watched over for three years, after which, he could resume – which he did.

Asked this week who sat in judgment on O’Callaghan 30 years ago, the Law Society declined to say, asserting the matter was sub judice. Citing the same reason, the society also declined to furnish The Irish Times with a copy of the report that led to the 1990 High Court decision or to say whether it had, at that time, referred O’Callaghan’s conduct to the Garda.

O’Callaghan’s more recent victims have yet to have their day at a tribunal.

They include the Colleran family of Ballaghaderreen whose now wheelchair-bound son is short some €400,000 which O’Callaghan retained from his court-determined accident compensation and Tom Fleming, who recently accepted a settlement of €100,000 in place of the €250,000 he was supposed to get from a land sale handled by O’Callaghan.

He hopes the Law Society compensation fund, into which O’Callaghan must pay €10,000 within a year as part of the sentence of censure the tribunal handed down on him, will make up the difference.

Like the law firm involved in this week’s tribunal which finally got what was rightfully theirs, O’Callaghan’s other aggrieved clients would like their day.