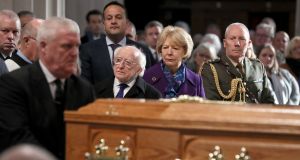 Gay Byrne was remembered at his funeral on Friday as a much loved husband and father, a friend and colleague and so very much more.

He was, said the presiding celebrant Father Leonard Moloney, “choirmaster of the national conversation”, a broadcaster who gave people a voice simply by listening to what they had to say.

In his homily, Fr Moloney recalled Byrne once explaining that if you wanted someone to talk, the trick was to listen to what they had to say.

He said that Gay believed no one was “really ordinary”. And in facilitating the women of Ireland tell their extraordinary stories, “he let their voices be heard”.

Byrne died at his Howth, Co Dublin, home on November 4th after a long illness with cancer. His immediate family, wife Kathleen, and daughters Crona and Suzy, were with him. He was 85 and had been broadcasting, in Ireland and, briefly, in the UK, almost continually since the 1950s.

His funeral service in St Mary’s Pro Cathedral was a polished affair, largely devoid of expressions of grief but rather imbued with a sense of gratitude – formal but warm, friendly and intimate as well.

The tone was set early by his daughter Suzy who gave a welcoming address shortly after her father’s plain wooden coffin, dressed with a huge spray of deep red roses and greenery, was brought before the altar.

“Dad had no fear of death,” she said in a clear and unfaltering voice, proving once again that the apple does not fall far from the tree. “But he had two wishes: to be in his beloved home and not to suffer.”

She heaped praise and thanks on the medical and catering staff at the Mater Hospital for all they had done. They saw their patient not as Gay Byrne, but one of their own – a Dub.

“Thank you Dad. Today our farewell is one of thanks . . . Thank you most of all for being you.”

The Byrne grandchildren, Cian, Sadhbh, Kate, Saoirse and Harry, and grandniece Hannah, led prayers, including one urging people to be kind and generous to the homeless this Christmas.

Fr Moloney noted that for all the controversy that sometimes attended Byrne’s professional life, he was a man of faith and with a deep belief in the necessity to show kindness.

“Those who were closest to Gay knew him as a kind, generous and simple man who would counsel them always to give people the benefit of the doubt because, as he used to say: ‘You never know what they are going through.’

Byrne’s stellar and extraordinarily influential broadcasting career was the main subject of former RTÉ director general Bob Collins’ lengthy eulogy. He said Byrne was “reflective, deep, serious, [and] thoughtful. [He was] A person of values. And for that, we are grateful”.

The Late Late Show was created at a time when Ireland had already begun to change, he said.

“People were beginning to have a new sense of themselves,” said Mr Collins. “Women were finding their voices - and raising them. But Gay recognised that, he discerned what was coming in terms of social development and social change, he understood the democratising power of television and he was a very important companion and guide on that journey into the modern era.

“The people appreciated that and loved him for it. . .

“Gay showed us to ourselves and he had the unrivalled ability to reach out to vast audiences by speaking to each person, individually, as it were.”

The final blessing was given by Archbishop of Dublin, Dr Diarmuid Martin, who was applauded when he said of the man about to be laid to rest in St Fintan’s Cemetery in Sutton: “It is an honour for this cathedral to welcome a man of faith and a Dubliner.”

In his homily, Fr Moloney told of the broadcaster’s final hours. Fr William O’Byrne came to anoint Gay in preparation for his death.

When the procedure was complete, Gay turned to the priest and said: “That was nice. Thank you. Amen.”

A fitting epitaph as the burial party drove away along Marlborough Street, an appreciative cheer and applause from those gathered to say goodbye.