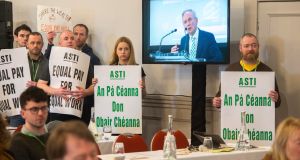 Minister for Education Richard Bruton’s speech to ASTI delegates on Tuesday was interrupted by heckles amid anger over two-tier pay rates for teachers.

Mr Bruton said teachers had a “justifiable demand” for pay equality, and the Government was keen to make progress on the issue. However, ASTI’s vice-president and conference chairperson was forced to intervene on several occasions amid chants and interruptions from delegates.

About two dozen delegates stood during Mr Bruton’s speech holding placards stating “Equal Pay for Equal Work”, and heckled the Minister throughout his speech calling for an end to two-tier pay.

Up to 24,000 teachers hired since 2011 are on lower pay scales than their colleagues.

When Mr Bruton addressed the topic about 25 minutes into his speech, acknowledging the union’s “justifiable demand” for equal pay, he drew loud and sarcastic cheers and a round of applause.

Mr Bruton’s speech acknowledged the “transformative” role teachers and the introduction of free education have had on society over the past 50 years. However, his pledge to ensure Ireland has the best education and training system in Europe within a decade drew jeers and laughter from some delegates.

Mr Bruton said he had supported leadership in schools through investment in new promotional posts, which sparked heckles from the floor such as “how about leadership on equal pay?” and “pay up now!”

His commitment to tackle teacher shortages and expand subject choice to include languages such as Mandarin Chinese also drew heckles and laughter. “We can emigrate to China, so!” shouted one delegate.

Mr Bruton said the Government would address the issue of pay across all sectors of the public service. However, he clarified that this demand must be balanced against other needs in the education system.

He said starting salaries have been increased and the pay gap has closed by 75 per cent.

Mr Bruton said there was “goodwill on the side of the Government,” but this needed to be balanced against the need to make up for a lost decade in education. He said this money needed to be managed fairly because resources for children with special needs and increased provision of guidance were also important.

Mr Bruton’s speech drew applause at the end, after which protesters left the conference room.

Earlier, ASTI president Ger Curtin said the term “new entrant” teacher was a misnomer given than many were now in their seventh year of teaching. Many have lost up to €7,000 per annum due to inferior salary scales compared to those who entered the profession one or more years before them.

He said many of those who graduate from teacher training courses were opting to move abroad or take jobs elsewhere.

“Why wouldn’t they when they are being offered full-salaried permanent jobs abroad? As the number of second-level students entering our schools continues to rise, principals are reporting severe difficulties recruiting teachers across a range of subject areas. Students need qualified teachers.

“The situation is urgent. How can we attract and retain new entrants when so many of our teachers are underpaid and undervalued?”

He also called for an end to “casualisation in the teaching profession” to ensure it continued to be a sustainable career option. “Many teachers spend up to five, six, seven years of their career doing ‘hours’. These teachers need jobs not ‘hours’.”

Mr Curtin said recent research found almost half of post-2010 entrants to teaching were in temporary or part-time employment.

The ASTI president also emphasised that three unions’ participation in a joint campaign for equal pay amounted to a “powerful force”.

“Together the three unions are a force of close to 70,000 teachers. Seventy-thousand teachers who are saying a collective ‘no’ to the discriminatory treatment of their younger colleagues, because they value teaching and education in Ireland.”