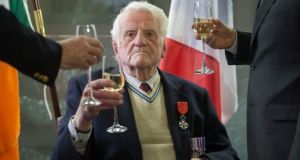 A file image of Jack O’Mahony, an Irish man who fought in the British army during the second World War who has now turned 100. Photograph: Michael Mac Sweeney/Provision.

An Irishman who survived the Blitz and Normandy landings during the second World War to play his part in the liberation of France, celebrated his 100th birthday with his family in Co Cork on Tuesday.

Jack Mahony, originally from Laharn near Killarney, Co Kerry but now living near Midleton, was joined today by his son, Gerald and other relatives to mark the occasion.

“Dad has had an amazing life - he was always very supportive and we all love him very much,” said Gerald Mahony, as he prepared to celebrate his father’s birthday at Leamlara Care Centre where Mr Mahony is being cared for. “We are very proud of him and hope for the best for the future.”

Mr Mahony Jnr said his father was delighted to receive a letter from President Michael D Higgins wishing him well on his birthday along with the Centenarian’s Bounty, a cash gift of €2,540 paid to to every citizen who reaches 100.

An emigrant to England at the age of 17, Mr Mahony joined the London Metropolitan Police in 1938 and was with the force when the war broke out. He was exempted from conscription but decided to join the army after he, his wife Mary and Gerald, then an infant, escaped a German bombing.

Mr Mahony previously told historian Dr Joseph Quinn, for his research into Irishmen who served in the British armed forces during the second World War, that he felt he was duty bound to join the army after the Luftwaffe bombed their home in Leyton in 1942.

“I think there was a need to do what we could, because they bombed my own bloody flat.... They were hitting me in my own house... it (joining the military) appeared the right thing to do... I had no bones about that ... it was something that I had to do... lots of my friends volunteered, “ he said.

After landing on Gold Beach on June 6th, 1944, Mr Mahony fought with the 2nd Seaforth Highlanders as they liberated Caen and fought their way up into Belgium and Holland where just outside the city of Venlo, he was captured by the Germans in late autumn 1944, ending up in a camp for prisoners of war (POWs).

After being freed from Luckenwald POW Camp near Berlin when it was liberated by Soviet soldiers in 1945, Mr Mahony, who was twice wounded in Normandy, escaped with a number of others who made their way by bicycle to the Elbe river, where they met US troops.

“When we saw the American soldiers (on the other side of the Elbe), we knew we were safe,” said Mr Mahony.

After returning to the UK after the war, he rejoined the police and went on to have a distinguished career as a detective in the Flying Squad until his retirement in the 1973.

He was honoured in 2015 by France when first counsellor from the French Embassy, Phillipe Ray, presented him with the Legion the Legion d’Honneur for his role in the Liberation of the country.

“Your story, Jack is a testimony to the courage of all men and women who refuse to give up and who uphold the principles they live by .... in honouring you , we honour the bravery of all Irish men and women who have stood for liberty, equality and fraternity alongside France and continue to do so,” Mr Ray said.