ASTI, TUI, INTO ask Government for pledge by next month on ending two-tier salaries 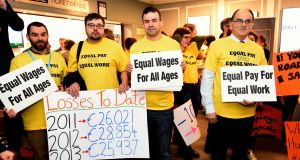 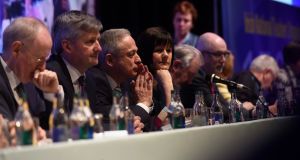 All three teachers’ unions have formed a united front and backed motions calling for potential strike action unless the Government commits to abolishing two-tier pay for new entrants by next month.

The Association of Secondary Teachers’ Ireland (ASTI), the Irish National Teachers’ Organisation (INTO) and the Teachers’ Union of Ireland (TUI) all unanimously backed motions on Tuesday which will ratchet up the pressure to restore equal payscales.

Talks between public sector unions and the Government on the issue are set to to begin later this month.

The motions state that a failure to resolve two-tier pay will trigger a ballot for industrial action, “up to and including strike action”, in conjunction with other teacher unions.

Speaking earlier at the INTO conference, Minister for Education Richard Bruton said teachers had a “justifiable demand” for pay equality, but that he had to balance this against the other needs of the education system.

ASTI president Ger Curtin told delegates that two-tier pay was a matter of “justice, equality and fairness” and needed to be tackled as a matter or urgency.

There were also calls from delegates to ensure that the union stands “shoulder to shoulder” with others on the matter.

Siobhán Peters, a new entrant teacher, told the convention that a recent Government report on the issue had “disrespected” teachers by not committing to tackling the issue. She said she earned about €5,000 less than her more experienced colleagues and called for all three unions to worth together.

Mary Linden, a Tipperary teacher, said she had encouraged her son and daughter to enter the teaching professional several years ago.

“If I could go back and knowing what I know now, I would probably say ‘no, don’t do it, look elsewhere’,” she said.

Noel Buckley, a Tipperary-based teacher, said if the ASTI had learned any lesson from last year, it was that isolation would not work.

This was a reference to the ASTI’s “repudiation” of public sector pay deals which triggered pay losses for thousands of members. Members of the INTO and TUI, which remained inside the pay deal, were not affected.

“When we choose a strategy let’s think it through carefully, let’s stand united so that we can stand here next year and say we got that injustice right,” he said.

There were also differences of over the ASTI’s decision to stand down its industrial action last year.

Ed Byrne, a former president, said the only reasons the INTO and TUI had secured gains in recent years was due to the ASTI’s industrial action. He said industrial action was the only way to secure gains, not “simply sitting on your hands.”

The ASTI also opened a new front in its campaign on equal pay by backing a motion to secure parity of expected pensions for recent and longer-serving new entrant secondary teachers.

Delegates heard that new entrants stand to lose out significantly due to changes introduced in 2013 which means pension for more recent teachers are based on their career average rather than their final salary.

Addressing delegates at the INTO conference, union president John Boyle threatened to “go to war with this Government, and topple it if we have to,” over the pay disparity.

“All three unions overwhelmingly rejected the Public Services Stability Agreement (PSSA) because it didn’t provide full upward pay equalisation. We subsequently convinced other ICTU affiliates that it was also in their best interests that pay equality be restored quickly.”

Mr Boyle said that teachers who entered the profession after 2010 are at least three points behind where they should be on the salary scale, and that newer teachers stand to lose €100,000 over the course of their careers.

“The victimisation of new entrant teachers has created feelings of deep resentment in school staffrooms all over Ireland. Discriminatory pay scales are eroding teacher morale, sapping good will and creating divisions within workplaces.”

Tomás O’Reilly, a teacher from Roscommon-south Sligo, said he and his fiancé, who is also a teacher, had already lost about €30,000 each over the last few years.

“My parish has two schools, four bartenders, eight teachers and three special needs assistants,” he said. “There isn’t much more: teaching represents at least 70 per cent of our employment and it is a profession that gives rural Ireland a chance to thrive.”

He said he has four sisters, all of whom have had to emigrate for work.