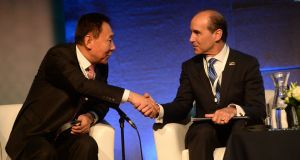 A senior official in Donald Trump’s US administration has criticised Ireland’ s dependence on peat and coal for electricity generation.

Mark Menezes, US under-secretary for energy, told The Irish Times that the State should follow the lead of the US in embracing liquified natural gas (LNG) and nuclear power.

Mr Menezes was one of the speakers at the International Energy Agency’s (IEA) Global Conference on Energy Efficiency in Dublin Castle on Monday.

The Trump administration has been repeatedly criticised for its approach to environmental issues and in particular its decision to pull out of the 2015 Paris Agreement on climate change mitigation.

Mr Menezes said Ireland should replace its peat and coal-fired stations with liquified natural gas (LNG) imported from the US, which is a much cleaner fuel than coal or peat. Mr Trump has been a big supporter of LNG, which is natural gas that is liquified so it can be transported without the need for a pipeline.

The US has become one of the biggest shale gas producers in the world through the use of the controversial technique of fracking.

Mr Menezes said: “In Ireland you have peat that you continue to use for electricity generation which is not good for the environment. You have a coal facility that still provides at least perhaps 10 per cent of your electricity.

“You have these aspirational goals that your Government is embracing. Look to bring in US LNG and replace your peat and if you want to minimise your coal use, that is a quick win right there. You will achieve your emissions reductions demanded of you by the Paris [agreement].”

He also suggested that Ireland should embrace nuclear energy as these “plants are emission-free”.

“The life expectancy can be several generations. When you look at the cost of that facility over its lifetime, it’s literally pennies per kilowatt hour,” he said.

“It’s one of the cheapest sources. You can grow your economy. You can reduce your emissions. You can guarantee long-term supply and you can complement renewable. That’s what I would say to the people of Ireland.”

Speaking at the conference, Mr Menezes gave a robust defence of the US record on climate change. He said the US was driving innovation which was bringing down emissions. He said his department had pioneered LED lighting.

“We expect energy efficiency will continue to rise with policies that clearly favour innovation over regulation bringing forward new technology in a world characterised by energy abundance rather than scarcity.”

Mr Menezes said the US is “leading the world” in terms of reducing greenhouse gas emissions.

“It has been innovation over regulation,” he said. “It has ignited a technological revolution that has not only increased energy supply, but created a whole new world of energy efficiency.”

A senior Chinese official defended his own government’s record on energy consumption said that between 2006 and 2018, China’s GDP grew by 150 per cent, but energy consumption per unit of GDP growth has been lowered by 46 per cent in the same timeframe.

“The Chinese government have been attaching great importance to raise the public awareness among different institutions, individual families and schools,” he said.