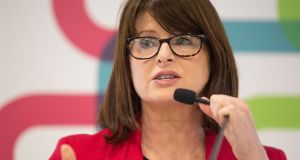 The Government has “exacerbated” the housing and homelessness crises by its policy choices, the Human Rights Commissioner has warned.

In a strongly worded speech, Emily Logan described the Hap (housing assistance payment) as “not fit for purpose”; described cuts to organisations advocating for people with disabilities as “hard to comprehend” and out of line with Ireland’s new international human rights obligations.

Speaking at the publication of the 2018 annual report from the Irish Human Rights and Equality Commission (IHREC), she also called for an end to use of commercial operators to house asylum seekers and accused the Government of “normalising” homeless.

“We have been particularly concerned by the attempt by Government to underplay the human aspects of the crisis – its direct effect on the lives and well-being of men, women and children and the upheaval it is causing so many families,” she said.

“The housing and homelessness crisis cannot simply be treated as a natural by-product of market dynamics. It has its roots in policy choices made by successive governments over the past two decades and has been exacerbated by the policy choices of this Government in the past eight years,” she said.

The Hap is “nowhere close to being a solution” to the crisis, she said.

In the context of “out of control” rents and “systemic unlawful discrimination” against recipients of the payment, “it is not fit for purpose”, said Ms Logan.

She said it was “hard to comprehend the very disappointing and exclusionary actions by the HSE to cut back on advocacy work in the disability sector”.

In March 2018, Ireland became the last EU country to ratify the United Nations Convention on the Rights of People with Disabilities.

“There is no doubting the importance of funding service provision but the need for prioritising disability services cannot form an argument for cutting back on advocacy,” she said.

It was “fundamental” to vindicating human rights and this was enshrined in the convention.

“The recent cutbacks to advocacy work in Ireland would not align with the new obligations under the UNCPRD,” she said.

An increasing number of asylum seekers were being accommodated in hotels and guesthouses where they could be removed and brought elsewhere in the country at short notice if the hotel owner needed to accommodate commercial guests.

“At the very least we need to look seriously at breaking the link between direct provision and private, often unaccountable, profit-making non-State actors...Ultimately we need to see the total abolition of direct provision,” she said.

She called for a crackdown on hate speech, both online and elsewhere.

“The right to freedom of expression is not an absolute right. It can be legitimately restricted and at the same time support a democratic society.

“Hate speech silences and marginalises those whom it targets. Hate speech causes people to withdraw from society, to avoid expressing their identity,” she warned.