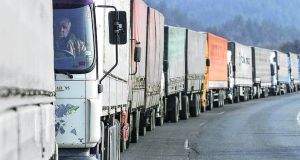 A common food safety and animal health area covering Britain and Ireland could help to keep the Border open without the backstop after Brexit, a group of politicians, academics and trade experts has proposed. File photograph: Stoyan Nenov/Reuters

A common food safety and animal health area covering Britain and Ireland could help to keep the Border open without the backstop after Brexit, a group of politicians, academics and trade experts has proposed.

A privately funded initiative, the commission is dominated by hard Brexiteers but chaired by Conservative MPs Greg Hands and Nicky Morgan, who backed Remain in the 2016 referendum.

At the publication of its interim report in London on Monday, the chairman of the commission’s technical panel, Shanker Singham, said the joint British-Irish sanitary and phytosanitary (SPS) area would initially be fully aligned with EU regulations.

If Britain wanted to diverge from EU rules in the future, Ireland could withdraw from the joint SPS area and Northern Ireland could choose whether to remain aligned with Britain or join Ireland in remaining in the EU’s regulatory system.

“It defers the decision about when you might lock into whose regulatory system to the point at which it becomes relevant, which is I think politically a very important element of this,” he said.

Mr Singham acknowledged that Britain could instead seek to enter the entire UK into the EU’s SPS regulatory system, as Switzerland and Norway have done. But he said a fully independent trade policy was necessary to compensate for the inevitable disruptions caused by Brexit.

“The only benefits of Brexit are an independent trade and regulatory policy, the only economic benefits. So you have to retain those to overcome the disruptions. That’s just the hard reality of Brexit,” he said.

The report argues that the World Trade Organisation’s frontier traffic and national security exemptions could be used to justify the establishment of SEZs in the Derry-Donegal and Dundalk-Newry corridors. These zones would be treated as single economic areas with no checks or tariffs, but Mr Singham acknowledged that the borders of each SEZ would have to be policed.

The Irish Government did not co-operate with the commission, which will publish its final report next month along with an alternative arrangements protocol its supporters hope could replace the backstop or sit alongside it in the Withdrawal Agreement.

Business representatives at Monday’s event were sceptical about the commission’s proposals for customs facilitation and Neil McDonnell, chief executive of Isme, warned that the added costs could drive small firms out of business.

“It’s not that any of this stuff isn’t doable or feasible in the long run, it’s that if you attempt to do this stuff in a big bang it will have an impact,” he said.

“The Higgs boson was posited in 1964 but no one could prove it was there until 2012 – so 48 years to prove something that a Brit said was around in 1964. But we did have to build the Large Hadron Collider to get there, so you just want to keep it simple.”