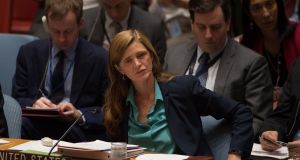 Samantha Power: ‘I think you see from the alt-right’s own language how the unsayable is now said, the unthinkable is now thinkable’. File photograph: Bryan R Smith/Getty Images

Samantha Power, the Irish born former US ambassador to the United Nations, has criticised Donald Trump for pandering to the extreme right wing constituency that is perverting the norms of basic decency in the US.

Ms Power said that the events in Charlottesville where neo-Nazis marched in a torchlight procession at the University Virginia, chanting “Blood and Soil” and “Jews will not replace us” was just another indication of how political discourse in the US had shifted since Mr Trump’s election as president.

“I think you see from the alt-right’s own language how the unsayable is now said, the unthinkable is now thinkable and said and done and when you see people like David Duke’s praise of Trump’s comments as affirming their views, they see themselves as having a friend in the White House, ” she said.

“And I think this pardon by president Trump of Joe Arpaio is going to play to that same extremist view because what Arpaio was doing was profiling and judging people on the basis of their skin colour and that is something all leaders should be using their position of authority to combat.”

Mr Trump announced a pardon for Joe Arpaio, who styled himself as “America’s toughest sheriff”, on Friday night. It has spared the Trump supporter and immigration hardliner possible jail time for wilfully defying a court order to stop racially profiling Latino people in Arizona.

Mr Trump previewed the pardon at a raucous campaign-style rally in Phoenix, Arizona last week, asking the crowd if they liked Arpaio. When they roared their approval, he asserted, that Arpaio had been “convicted for doing his job”.

Speaking in Waterville in Co Kerry as part of the Charlie Chaplin Festival, Ms Power said one of the most worrying aspects of the Trump presidency was how truth was being distorted and dismissed by the president as “fake news” as happened with his press conference on events in Charlottesville.

“All you have to do is watch his press conference, unfiltered and uncut, where he said that- you don’t need mainstream media cutting and splicing and yet afterwards because he faced such criticism he came out and said ‘It’s fake news, I never said it’.”

Ms Power, who was speaking in a question and answer session with former RTÉ Washington correspondent, Carol Coleman, pointed out that Fox News then re-iterated Mr Trump’s version by only playing the clips where he condemned fake news.

“We now have a situation for the first time where the majority of Americans don’t believe what they read in the news - we saw it earlier on vaccination and climate change - science became opinion and now facts associated with our daily lives are seen as manipulation and propaganda.

“Everything is propaganda which is how it is being portrayed by the President of the United States of America who has 35 million followers on Twitter - that is colouring how people hear things and what they hear and it affects their view.”

Ms Power said that she had never been a fan of President George W Bush when he was in office but she had to acknowledge that he had never had any truck with the sort of racist or sexist language and behaviour which had now become tolerable as part of political discourse in the United States.