‘She has a language difficulty – not a learning disability’ 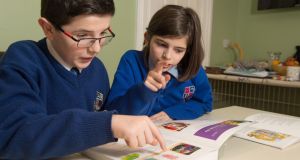 Oisín Boland and his younger sister Sinéad, who is profoundly deaf. They both attend their local Gaelscoil in Navan, Co Meath 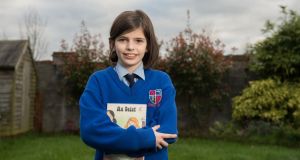 Sinéad Boland, who is now preparing to go into fifth class in her local Gaelscoil in Navan, Co Meath, loves Irish and is thriving socially

Anne-Marie and Niall Boland, from Navan, Co Meath, have made an unusual choice of school for their deaf daughter.

Sinéad (11) has been going to Scoil Éanna, her local Gaelscoil, since she was six years old.

Diagnosed as profoundly deaf at the age of one, Sinéad was fitted with a cochlear implant at the age of two and has benefited hugely from it. She received a second implant this year.

Some might have thought her parents misguided when they made the decision to send her to a Gaelscoil, when so many deaf children are known to struggle with spoken English, never mind Irish.

However, her parents saw her thrive in an Irish-speaking preschool, or naíonra, located alongside her older brother Oisín’s primary school.

Sinéad fitted in so well that by the end of the year “the idea of splitting her from her pals in the naíonra felt like a bridge too far”, Anne-Marie says.

In addition, she “idolises” her older brother so it made sense to let her follow him into the Gaelscoil.

While school principals were reluctant to take on students with special needs until a few decades ago, the Gaelscoil principal was open-minded about taking Sinéad.

She is now preparing to go into fifth class this September, loves Irish and is thriving socially.

Sinéad’s mother says her positive experience is in part due to the school’s resource teacher who understood that she “does not have a learning disability, but a language difficulty”.

“She is very pro-active and inventive, always trying to find new ways to help Sinéad expand her vocabulary and developing strategies to help her comprehension,” Anne-Marie says.

If your child is happy in school, they will learn

She acknowledges that, compared to other parents, they seemed very lucky in the quality of support they got from professionals with whom they interacted.

In terms of ongoing class assessments and standardised tests, Sineád’s results are firmly in the average percentile, even though Anne-Marie believes the scores belie her true intelligence.

“I rely more on feedback from her class teacher, resource teacher and her speech and language therapist. They have a better understanding of how she compares to her peers on a daily basis.”

The words of a speech Anne-Marie heard the principal of the secondary Gaelscoil her son now goes to continue to resonate with her.

“If your child is happy in school, they will learn.”