Woman, who was seven months pregnant, last seen in Tullamore in August 1996 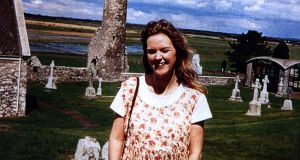 Fiona Pender: some 100 people took part in an event in Tullamore, Co Offaly, on Sunday in memory of the young woman, who disappeared in 1996

The mother of missing woman Fiona Pender, who was last seen in Co Offaly 21 years ago, has said that as long as there is “a breath” in her she will fight to keep her daughter’s memory alive.

Josephine Pender was speaking in Tullamore on Sunday as about 100 people took part in a walk and run in memory of Fiona, who was seven months pregnant at the time of her disappearance on August 23rd, 1996.

Gardaí believe Fiona, who would have turned 46 last month, was murdered but despite extensive investigations no trace of her has been found.

Friends of Pender family campaigned to have a stretch of the bank of the Grand Canal renamed Fiona’s Way in her memory and a 5km walk and run is held there annually. John Pender, Fiona’s youngest brother, designed a memorial that marks the beginning of Fiona’s Way, just yards from where the family lived in Tullamore.

Speaking at the walk on Sunday, Mrs Pender said she wished Fiona could be one of those taking part.

“I’m still very devastated and just heartbroken,” she said. “It’s very hard and it doesn’t get any easier, it gets harder. I get so worn out.”

Mrs Pender said she still grieved for both her daughter and her unborn grandchild but was heartened to have attended the christening of another grandchild at the weekend.

Fiona’s brother Mark was killed in a motorcycle accident in 1995 and their father, Seán, took his own life in 2000.

Mrs Pender said her husband never got over the deaths of his son, daughter and unborn grandchild and as long as there was “a breath” in her she will continue to keep Fiona’s memory alive and ensure ongoing publicity about the case.

“Keeping it up there in the media is not a help to me but I hope it’s a help in finding Fiona,” she said.

Mrs Pender’s sister Mary Conway thanked the public for their support. She said 21 years had passed “and in one way it’s a long time but it’s short in another way”.

She appealed to anyone with information about the case to pass it on to An Garda Síochána.