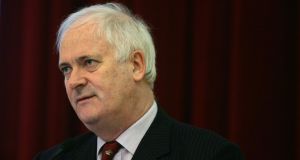 The summer school director, Prof Maurice Bric, said organisers are looking forward to hearing Mr Bruton, a former taoiseach and EU ambassador to the US, address Ireland’s changing relationship with the UK post-Brexit when he delivers the Daniel O’Connell Lecture. The summer school is to be held in Cahersiveen, Co Kerry, on Friday and Saturday, August 25th-26th.

“O’Connell spent much of his political career redefining the political relationship between Ireland and Britain. These relationships improved beyond recognition following the implementation of the Belfast Agreement,” said Prof Bric.

“However, Brexit has now called them into question once more. The Daniel O’Connell Lecture will provide an opportunity to explore the challenges which Ireland is facing internationally, and in particular, the challenges which Brexit poses for the future relationships between these islands.”

This year also marks the 150th anniversary of the unsuccessful Fenian Rising of 1867. The summer school will commemorate the event with a lecture by Vincent Comerford, emeritus professor of history at NUI Maynooth, on the impact of that episode on Ireland and its history.

“This topic is all the more interesting for people in South Kerry because it was one of the few places in Ireland where a Rising actually took place,” said Prof Bric, adding that Prof Comerford’s work, The Fenians in Context: Irish Politics and Society 1848-1882, is one of the definitive works on the Fenians.

Prof Bric pointed out that the summer school, which opens in the library in Cahersiveen on Friday with an address by RTÉ political correspondent Micheál Lehane, moves to O’Connell’s home at Derrynane on Saturday, where former attorney general Paul Gallagher will talk about O’Connell and the law.

“Among the other speakers we have is Sir Adrian Fitzgerald, the 24th Knight of Kerry and a member of the Conservative Party in the UK, who will speak on the sometimes troubled relationship between O’Connell and the Knights of Kerry, who lived at Glanleam House on Valentia Island,” he said

Dr Ciaran McDonnell, who teaches history at UCD, will give a lecture entitled Daniel, Count O’Connell, while Dingle based GP Dr Conor Brosnan will give a lecture on Admiral Sylverius Moriarty, who was born in Ballyferriter in 1735 and ended up as a high-ranking officer in the Royal Navy.

For the full programme of this year’s summer school, please visit oconnellsummerschool.com.