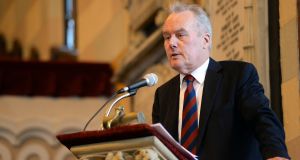 Former Sunday Times columnist Kevin Myers has withdrawn from moderating a talk on censorship in Limerick after his appearance in the line-up provoked a storm of “vitriolic” abuse.

Mr Myers, who was dismissed from the Sunday Times last month, was due to moderate a talk in Limerick city next month on the subject of censorship, which will be given by Jodie Ginsberg of the Index on Censorship.

Ms Ginsberg, who leads an organisation that publishes work by censored writers and campaigns for free expression worldwide, is the only female speaker in the series of talks organised by Limerick Civic Trust.

The Sunday Times issued an apology following the publication of an article on July 30th by Mr Myers, which contained opinions about why women were paid less than men and appeared to suggest that presenters Vanessa Feltz and Claudia Winkleman were well paid by the BBC because they were Jewish.

David O’Brien, chief executive of the trust, told the Limerick Leader he had spoken at length to Mr Myers in recent days, and the latter felt it was best that he withdraw from the forum “in the present circumstances”.

“He felt that his presence was going to take away from the event itself and become an alternative event, and that just wouldn’t be right,” said Mr O’Brien.

Speaking to The Irish Times last week, Ms Ginsberg – who is of Jewish heritage – said she was “happy” for Mr Myers to moderate the talk.

“I wouldn’t be much of a free speech advocate if I refused to debate with someone whose views I disagree with,” she said.