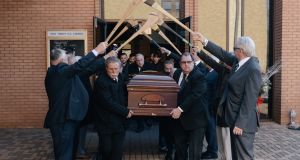 The funeral of Matty Maher, the Kilkenny-born proprietor of McSorley’s Old Ale House in New York City, who died on January 11th, aged 80. The funeral was held at the Holy Trinity church in Whitestone, New York. Photograph: Lauren Crothers

McSorley’s Old Ale House, opened by Irish immigrant John McSorley in 1854, is the oldest Irish pub in New York, where sawdust on the floor provides a comforting crunch underfoot and walls are decked with mementos of yesteryear.

The chair Abraham Lincoln is alleged to have sat on looks down over the bar, along with dusty fire helmets and the turkey wishbones eaten by men who never returned from war.

This week, however, the mood in the popular East Village haunt in Manhattan is sombre, following the passing of its beloved long-time owner, Kilkenny-born Matty Maher, who was buried on Wednesday.

His funeral on a bright, crisp morning on Wednesday was attended by hundreds of family and friends. His casket was escorted by two pipers from the New York fire department, and carried under an arch of hurleys.

“Nothing ever held him down. He saw good in any situation,” she said.

Paying tribute, Fr Tom Brosnan said tombstones usually have a hyphen between the deceased’s dates of birth and death: “Matty’s hyphen should be very long; not because of the years he lived, but because of the things he accomplished in those years.”

Mr Maher’s move to New York and eventual ownership of the bar was serendipitous, following a chance meeting in 1964 when he was just 25 with its then-owner, Harry Kirwan after Kirwan’s car broke down during a holiday in Ireland.

The young Maher came to his aid, and the older publican promised the young Kilkenny man a job should he ever find himself in New York. Mr Kirwan was true to his word.

Stepping into those shoes years later, one of Mr Maher’s greatest gifts was in knowing “all the regulars”, who included second World War veterans, but also in remembering people he’d only met once.

Recalling his employer, the pub’s longest-serving barman, Jeff Bartholomew, hired by Mr Maher in 1972 when the latter was the manager, said: “He ran the taps. He was the nexus for the whole place.

“He was one of those guys you’d really want to be in a foxhole with. He could see what was going on and he knew what was going on,” Mr Bartholomew, said on Tuesday before leaving for his old boss’s wake.

Remembering one of Mr Maher’s final visits to the pub, fellow bartender and family relative, Shane Buggy said he had been “a true, traditional Irish publican” right to the end.

Encountering a group he had not seen for 15 years, the elderly landlord “walked over to the bar, got a fistful of ale and just dropped it down and said, ‘Welcome back, lads.’ He was always like that. His generosity knew no bounds.”

His passing shocked family and friends, said Buggy, remembering his last meeting with him a week ago, where his boss left him parting advice.

“Ah you’re doing a great job down there, lads, keep it going,” Mr Maher had said. “Keep those doors open and keep the fire lit and you’ll have a crowd there this afternoon.”

In its own message on Facebook, McSorley’s said: “When he started working at the bar, McSorley’s was still a men-only establishment with dozens of flophouses within blocks from 15 East 7th Street. When they had to let women in by court order on August 11th, 1970, the bar’s future was uncertain.

“And when Matty purchased the place in 1977, the city was near bankrupt and the neighbourhood’s future uncertain. Landlords were just walking away from their buildings, heroin was rampant, cars had to wait in lines that extended for blocks just to get gas, crime, and grime everywhere.

“But Matty left poverty back in Ireland and he was determined to leave it behind for good. He saw an opportunity and believed in the American Dream. And he loved history and all things Irish and knew McSorley’s and the city could survive when so many others told him he was absolutely nuts.”