The Irishman who tried to assassinate King Edward VIII

Why did MI5 not act when the informer told them he was part of a plot to kill their king? 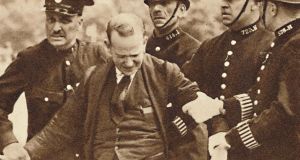 George McMahon aka Jerome Bannigan was sentenced to 12 months’ hard labour for producing a revolver with intent to alarm the British king. Photograph: The Print Collector/Getty Images

A little after midday on July 16th, 1936, as King Edward VIII rode back to Buckingham Palace at the head of six battalions of guards, George McMahon – shabby brown suit, hair thinning – pushed through the crowd lining Constitution Hill brandishing a loaded revolver.

Police lining the route moved to seize him in a chaotic melee of struggling and shouting. The weapon flew from McMahon’s hand towards the king, landing at the feet of his horse. Edward wrote to a friend the next day, “We have to thank the Almighty… that the man in the brown suit’s gun did not go off”.

At his Old Bailey trial in September, McMahon was jailed for a year for possession of a weapon with intent to alarm the king. That seemed to end matters. But the story was not as simple as the authorities wanted the public to believe.

For a start McMahon – a petty criminal with links to Italian and German intelligence through their London embassies – had informed the British security service, MI5, not only that there was a plot to assassinate Edward VIII but also that he was involved. He even showed his MI5 handler the revolver he always carried.

McMahon then went on to tell MI5 and the Metropolitan Police Special Branch the day and place the attack was to be made, but they did nothing to prevent McMahon confronting the king. Why?

Was there an Irish link? In the days after the attack parts of the British media and the public wanted to think there must surely have been one. What other explanation could there be for what appeared a barely thwarted attempt to assassinate the British monarch? Pope Pius XI, Hitler and the Italian dictator Mussolini sent telegrams congratulating Edward on his fortunate escape from death.

One of the arresting officers taking McMahon across Green Park to his interrogation was heard to say: “These bloody foreigners coming over here to kill our king”.

An exchange at McMahon’s Old Bailey trial about his contact with Italian intelligence ran:

Did they speak to you about the rights and wrongs of Ireland? – Yes.

Did they suggest to you that this was not a very pleasant government here? – Yes.

And their system of government was better? – Yes.

Did they try to inflame you against the British government and the British nation? – Yes.

McMahon’s Irish connection was strong, but the relationship between Ireland and Britain in the 20th century ensured that it was not straightforward. He was certainly a child of Ireland, but he had been born in an Ireland under British rule. He seemed in two minds himself.

Facing charges at Bow Street Police Court on July 31st, McMahon told the magistrate: “I am a natural born British subject and so were my ancestors so far as I can trace.” But at his full Old Bailey trial in September, when asked by defence counsel: “You are an Irishman, are you not?”, McMahon replied, “Irish by birth”.

Jerome Bannigan (McMahon’s actual name) was born in Coagh Street, Cookstown, Co Tyrone, in the early years of the 20th century, the son of Patrick and Eileen (née Darragh). His father was a breadserver, delivering bread for Malone the baker by horse-drawn van. There were three children. Jerome was named after the patron saint for Roman Catholics – as the Bannigans were – of “people with difficult personalities”. Rarely could a name have fitted an individual so well. Within a few years of Jerome’s birth, the family had left Ireland, moving to Govan, a Glasgow working-class area, the centre of Clydeside ship building.

The Irish connection comes up again and again. A brother, Patrick, trains as a priest at St Patrick’s College, Dublin, is ordained in 1926 as a member of the Congregation of the Mission (Vincentians), eventually serving as a parish priest in England and finally Cork. Jerome, jailed in Glasgow in 1927 for embezzlement, takes the alias George McMahon on his release and flees in shame to Dublin, before eventually settling in London via Liverpool. In Liverpool he inexplicably undertakes election work for a virulently anti-Catholic and anti-Irish fundamentalist Protestant pastor and politician, Harry Longbottom.

Acting as an informer to Special Branch in London, McMahon claimed in October 1935 to have intelligence about gun-running into the Irish Free State, presumably to stock the IRA’s armoury. His uncle had a farm in the Border county of Tyrone so it was feasible McMahon would pick up knowledge about republican activities on the frontier. Special Branch shared the information with MI5, but director Vernon Kell reported that nothing substantive had been found.

When Scotland Yard made a public appeal for help in investigating McMahon’s attack on the king, the Irish connection came to the surface again. One informant said it was a well-known fact that IRA gunmen left the chamber next to a revolver’s barrel unloaded, as McMahon was reported to have done. An anonymous letter recommended keeping “a sharp look out on the Marylebone Irish Catholics… There’s a gang of them.” Another said McMahon had often been observed attending Irish republican meetings in Hyde Park, as well as Communist gatherings.

Was McMahon acting as an Irishman when he stood on Constitution Hill carrying a loaded gun? Ireland’s grievances against Britain had certainly been raised as an issue. But it is an impossible question to answer definitively. Even McMahon could barely explain his actions that day with any coherence. His motives were confused and his story shifted over time.

What remains central though is that MI5 and Special Branch made it possible for McMahon to confront Edward VIII with a pistol and, should he have wished and whatever the cause, to shoot him. (Edward VIII would later abdicate that December.)
James Parris is the author of The Man in the Brown Suit: MI5, Edward VIII and an Irish Assassin, published by The History Press