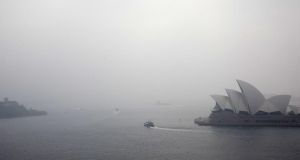 People look on as a fire smoulders at Voyager Point in western Sydney on January 5th. Photograph: Jenny Evans/Getty

It is the strangest of times here in Sydney. On the one hand, we are in the middle of an environmental catastrophe, while on the other, life continues as normal – or as the new normal at least.

Since early November, Sydney has been engulfed by waves of smoke, so thick sometimes we can’t see our neighbours’ houses across the street. I was sending my kids out to school in air four to five times the hazardous limits for industrial workers.

Wrapping itself around us like a suffocating wool blanket for weeks at a time, some days, the entire city and the Harbour Bridge disappear. Fire alarms have been going off in the high-rises as the air con sucks in so much bushfire smoke.

I was relieved when school ended for the summer holidays in early December. Somehow despite the pervading blue haze, I still had in mind our usual lazy days of bushwalks and afternoon swims. By mid-December, we had breathed in so much toxic air we could no longer smell the smoke.

I only realised this when I told our overseas visitors how lucky they were with their timing as we were having a few clear days. They said their eyes, noses and throats had been burning since they arrived. As we sat down to eat at an indoor cafe under a window cracked slightly open, I hadn’t batted an eyelid as I’d automatically swept the ash residue off the table.

Just before Christmas I lost touch with friends in the Blue Mountains to our west, where I used to live. I knew they hadn’t got out before the roads were closed. It all happened so fast; eight-metre high flames had leapt the highway in three places.

After five days, transfixed as my phone app showed the fire front swallowing that whole area, I finally got an email. They were alive. They had sustained heavy property damage, but they were all alive and, after a round-the-clock battle, they had managed to save their homes.

Friends to the south abandoned their house and have not been able to get back to see if it’s still standing. To our north, families we know mark themselves periodically as safe on Facebook.

Driving home across the bridge, the skyscrapers had lost their footings and were looming like some sci-fi city out of a drifting blue smog

After the eeriest of Christmases (and I’ve had a few shockers), we had cabin fever. I had become the mother who was telling her children to stay indoors in the height of their summer holidays. We couldn’t open the windows because it would let the smoke in.

The day Sydney was the hottest place on the planet, it was still 34 degrees inside our house at 9pm. Our chests felt like they had steel bands slowly closing around them.

I checked the fires app – where could we go for a few days’ respite, a breath of fresh air? There were fires raging to our north, south and west and nothing but the Pacific Ocean to our east, carrying smoke clouds the 2,000km to New Zealand. Major highways were being closed in every direction. As I realised that day, there is nothing for it but to bunker down.

We are the lucky ones. The national death toll continues to rise. Thousands are without homes. Over a million hectares are on fire, five million burnt. Half a billion native animals have died.

Although we back onto bushland, we live in a built-up area. The nearest fire we had was 1km away, but it was put out in a matter of hours.

On the days when we can’t go outside because the air quality is too hazardous, I’ve been watching Lost in Space with my kids. As I wandered through an outdoor mall on Sunday gathering a few essentials for the return to the new school year in a few weeks, my lungs on fire and my ears ringing with sirens, I was struck by how we all just carry on in this new abnormal-normal.

Driving home across the bridge, the skyscrapers had lost their footings and were looming like some sci-fi city out of a drifting blue smog.

The biggest cloud hanging over us is that there is no end in sight. We wander on in the haze. I wrote the following poem to try and capture the surreality of it all.

This is not a drill
by Anne Casey

Mom and daughter Robinson take off
their gas-masks as they enter the shop.
The air looks murky outside, everything
suspended in blue haze. Experts say Earth
has been hit by a meteorite (or so we think
so far). The impact was like an atomic bomb.
Vast areas engulfed in flames. Many people
have died. Or lost their homes. The military
have been deployed. Some say it is
the Apocalypse. There is no immediate
solution in sight. The nightmare continues.
This is a flashback scene. The Robinsons
are Lost in Space now. This is fiction.

The fire alarm goes off as I enter the shop.
Outside in the open-air mall a siren sounds
over and over. Over a loudspeaker a tinny
voice advises us that the fire alarm
has been activated. We are instructed
to stand by for further instructions.
After ten ear-splitting minutes,
no further instructions are issued. No-one
has stood by, much less slowed, in their hot
pursuit of bargains in the January sales.
The air quality app on my iPhone bleeps
a warning. It is hazardous to be outside,
breathing the suspended blue haze
that has swallowed most of Sydney.
We are not wearing gas-masks. My lungs are
burning. Experts say the wild bushfires
ravaging this country are like the impact
of an atomic bomb. Over a million hectares
engulfed in flames. Many people have died.
Or lost their homes. The military have been
deployed. My son says it is the Apocalypse.
Earth is trying to stop us Mum
before all the animals are gone.
There is no immediate solution in sight.
This is not a flashback scene. This is not fiction.

This is today and every other day
in Sydney since early November last year.
Watching and praying for friends
to our north, south and west fighting
to save their homes. Ordinary heroes
everywhere risking their lives. To our east,
the ocean carries smoke four hours’ flight
to New Zealand. Navy ships dock
at blaze-besieged beaches to rescue
stranded families from their Christmas
escapes. We are Lost in the Space now
between when this nightmare started
and its unforeseeable end.

A native of Clare, Anne Casey is an award-winning Sydney-based poet and writer. She is author of “out of emptied cups” and “where the lost things go”, published by Salmon Poetry