The outspoken Dubliner, who won the respect and admiration of the Burmese people, was found guilty of sedition 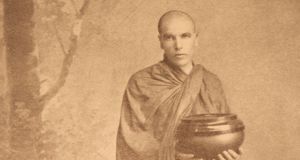 U Dhammaloka dressed in the traditional attire of a Burmese monk in 1902. Photograph: The Buddhist Society

The first Irish people to set foot in what is now Argentina were two cabin boys from Galway, William and John,  who were brothers but their surnames were not recorded. The pair sailed with Ferdinand Magellan during the first successful expedition to circumnavigation the world in 1520. Francis O’Neill, a young emigrant who also served in such a capacity aboard a transatlantic sailing vessel would later go on to become chief of police in Chicago and a man who, more than any other, helped to preserve Ireland’s rich traditional music heritage. In the early 1870’s another Irish-born cabin boy arrived on the shores of the eastern United States and began a remarkable journey that would take him across two continents and into the history books.

Likely a native of Booterstown in Co Dublin our mysterious emigrant appears to have gone by many names. At one time or another he referred to himself as Laurence Carroll, William Colvin or Lawrence O’Rourke alongside a number of other aliases. Once in the US he effectively became a migrant labourer and worked a series of odd jobs all across the country that eventually took him to the west coast. Having been effectively homeless for over a decade he often found himself an adversary of local lawmen and railway security alike, the latter because of his habit of sneaking aboard freight cars and “riding the rails” for free. We’re told he also had a propensity for violence and a predilection for alcohol, and may have immersed himself in trade unionism, anarchism or another form of anti-establishment radicalism. By the early 1880s he was once again working at sea, this time aboard packet ships in the Pacific before staying behind in Yokohama in Japan, perhaps against his will.

From Japan he made his way to south-east Asia eventually arriving in the British-controlled region of the recently truncated Kingdom of Burma prior to its complete annexation by the British Empire in 1885. Having initially worked in Lower Burma as a tally clerk in the port of Rangoon (Yangon) he met many Burmese monks and began to take a keen interest in Theravada Buddhism, the dominant local religion in the region. He ended up living in the Tavoy monastery and soon decided to become a novice monk himself. After a five-year novitiate he was ordained a Bhikku or full monk, and adopted the name “Dhammaloka”. It is most likely that this ceremony took place prior to 1899, which would mean he may potentially hold the distinction of becoming the first westerner to become a Buddhist monk.

After a brief period teaching students and novices at the monastery he embarked on a speaking tour across the country and further afield visiting and founding schools and associations in Ceylon (Sri Lanka), Singapore, Siam (Thailand), Japan, Malaysia and even Australia. He soon began to speak out against the activities of Christian missionaries and denounced their attempts to undermine the Buddhist faith of the Burmese people. His speeches frequently rebuked British colonials for failing to respect the religious and societal norms of the locals and his criticisms of the work of the proselyting Baptists, Roman Catholics, Anglicans and others were often merely veiled attacks on imperialism itself. His campaigns should be viewed within the context of the wider pan-Asian Buddhist Revival primarily sparked by western colonialism and modernity taking place across the continent at the same time that he played a key role in.

He quickly attained celebrity status and his position as a white European who nevertheless actively resisted the colonial system meant he was uniquely positioned to communicate the plight of the Burmese people internationally, and even to challenge the proclamations of the missionaries themselves on theological grounds. The British administration grew frustrated with his efforts to undermine their authority and fearful that his vitriolic public speeches would enflame the large crowds who came to hear him speak and rouse them into open rebellion. He was charged with and found guilty of sedition in a celebrated trial and following a failed appeal against the sentence in early 1911 appears to have left the country, possibly moving to Bangkok.

This firebrand Irishman, who won the respect and admiration of the Burmese people, was widely forgotten in his native country for most of the 20th century. However thanks largely to the efforts of an international research network led by Dr Laurence Cox of Maynooth University, Dr Alicia Turner of York University in Toronto and Prof Brian Bocking of University College Cork we now know a great deal more about the enigmatic émigré Dubliner.