Be Good Or Be Gone: the McSorley’s way

McSorley’s on Seventh Street, recognised as New York’s oldest pub, has stubbornly resisted change – which is part of its enduring appeal 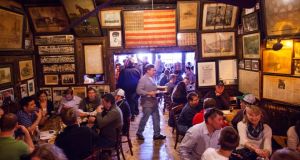 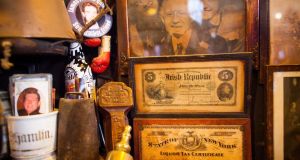 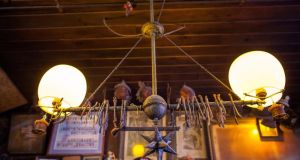 A gas lamp with wishbones said to be hung by World War I doughboys hangs over the bar. Photograph: Michael Nagle 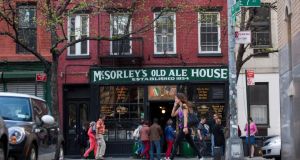 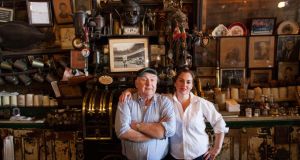 Your choice of drink is simple: a mug of dark or light ale. Or rather, mugs plural: ales are served in mugs of at two for $5. There is no fancy cocktail menu, no spirits whatsoever and no wine, from worlds old or new. There is no cash register here. The front-of-house men wear long aprons and a careworn manner and can carry two dozen mugs of ale at a time. The abiding law of the place is etched in decorative font into the wooden frontispiece of the bar: Be Good or Be Gone.

People often remark that the aroma in McSorley’s is distinctive: a house combination of wood and sawdust and onion and beer. But mostly, the place just reeks of a vanished time. Recognised as New York’s oldest pub, it is part beer house, part museum, its walls chock-a-block with memorabilia and curiosities collected by the original owner, John McSorley, who opened the doors in 1854.

Mattie Maher came to work in McSorley’s in 1964 after leaving Freshford, Co Kilkenny, ended up as the owner more by accident than design, and, in the sleepy hour before lunchtime, he is happy to act as curator. Overhead hang the black dusty brogues that were reputedly once worn by Honey Fitz – the Boston mayor who was a grandfather of John F Kennedy. If so, the man had small feet. There, behind the bar, is the bond issued by the Irish Republican Brotherhood. And above it a chair that was used by Abe Lincoln in a speech he gave at Cooper Union across the road. Framed also is a wanted poster for John Wilkes Booth. The seventh cavalry used to be stationed in a building across the road on Seventh Street. “They used to have an old rack here where they would put the rifles,” Mattie explains, pointing to the corner in the back room.

It is said that George W Custer used to come in here to blow the suds off a few before he was instructed to go west to put manners on the Sioux. Mattie isn’t claiming this as absolute truth – it is just what he heard from the old bartenders who worked under John McSorley and from the regulars who bought into the idea that there should be at least one establishment that should be rigorously and perversely resistant to change.

Until 1970, McSorley’s was a male-only preserve. Even Dorothy O’Connell, who owned the bar through the mid-20th century, observed the unwritten law and never set foot in her own establishment. For decades, that was fine – celebrated even. “The dignified workingmen who sit quietly for hours look as if they never thought of a woman. They are maturely reflecting in purely male ways and solemnly discoursing, untroubled by skirts or domesticity,” wrote an approving Hutchins Hapgood in Harpers Weekly (October 25th, 1913).

But by the late 1960s, with the East Village hippy set infused with anti-Vietnam stridency and Joan Baez ballads drifting from every second window, McSorley’s was considered a rank, objectionable relic of male chauvinism. Women wanted in – if only to prove a point. When Faith Seidenberg and Karen deCrow were refused service and ejected from the bar one night in 1970, they took a case to the Supreme Court and by Christmas of that year, it was a unisex saloon.

“Bloodbath,” says Mattie Maher of those early days of cohabitation in McSorley’s. “You had to look after a guy who would bring a woman in here. We had to hire a few hardy Irish bucks, being honest. On a Friday night, there might be three donnybrooks before eight o’clock.”

Of course, there was no women’s bathroom, either. “The attitude was: if you wanna drink with us, then . . .”

For a while, it looked like the place would close down. The O’Connells didn’t want the strife, the building was old; New York was heading towards the financial doldrums. Like many a business, the wrecking ball beckoned. Mattie Maher put up what money he had and found himself the owner.One night some bother boys tackled a group of women who were drinking in the place. The women promptly invited the men outside. It turned out they were a karate club on a social. “Beat the shite out of the lads,” Mattie chuckles. “Busted teeth, fingers. Word spread. It was the best thing that could have happened.”

That settled the equality issue. Mattie had toilets fitted. He asked his daughter Teresa to come and work the bar after she graduated from college in 1994. Like most employees, Teresa is too involved with the place to leave. They all become custodians of its oddities and its habits. She still doesn’t like asking people to leave but it is part of the custom: boisterousness or sitting over ale warrants an ejection. One or two Kennedys and the actor Leonardo diCaprio were among those shown the door down the years. Teresa is blithely uninterested in celebrity and can’t recall whom she has pulled ales for. It is more the situations that amuse her. For instance, that sleepy Monday night when a group of dwarves ambled in. They were all actors and were just warming up when the doors opened and half the New York Giants football team came through and took a table opposite the first party. “Only in McSorley’s.”

Two years ago, Mattie had to remove the dust which had gathered on the wishbones hung from gas lamps above the bar. A health department official had insisted on it. Those turkey bones were considered sacred: they had been left as good-luck charms by soldiers departing for Europe during the first World War. They were literally untouchable: hence the dust. But one Monday morning Mattie accepted the inevitable and brushed them clean. “Some of the guys wanted him to fight the ruling,” says Teresa. “But it looks now the way it did when the lamps were first put up.”

Some people call McSorley’s a tourist trap. But what kind of tourist trap declines to sell lucrative $15 cocktails or elects to close its doors at 1am when it could keep serving for another three hours? And why have so many people become fascinated with McSorley’s? John French Sloan, a leading member of the Ashcan group, painted a typical bar scene in McSorley’s in 1912, the first of several works he set there. The saloon features in the work of EE Cummings. Joseph Mitchell, the New Yorker writer and chronicler of the city’s demimonde, was so enthralled with the place that he wrote an entire book about it, McSorley’s Wonderful Saloon .

Geoffrey Bartholomew, who kept bar for 40 years, wrote a collection called The McSorley Poems that is both raucous and eerie, filled with terse, gripping life accounts of the various McSorleys of the late 1800s: Kate, fiancee of Peter who became an opium addict; baby James who lived for 10 months; George who broke his neck in a diving accident at Rockaway Beach.

“It has an amazing soul, if that’s a good way of putting it,” Mattie Maher says.

When it opened in 1854 it was called The Old House At Home. Changing the name of the bar was about the most radical change that McSorley’s has made since then.

And no, they don’t have wi-fi.