One of the city’s oldest Irish bars has counted many famous writers among its regulars, from Hunter S Thompson to Brendan Behan 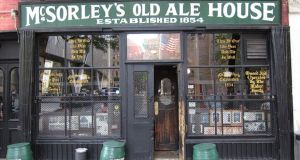 In the 1970s, Daria Blackwell was among one of the first female patrons of McSorley’s Old Ale House, one of New York’s oldest Irish bars. Photograph: Leonard J. DeFrancisci

The Irish Times’ Generation Emigration project is on the hunt for the best Irish pub in the world outside Ireland. The following is one of the entries we’ve received so far. To read more, or find out how to nominate your favourite Irish pub abroad, click here.

I first discovered McSorley’s Old Ale House back in the 1970s when I was attending NYU. Being of Ukrainian background, I would go to church services at the Ukrainian Catholic church on 7th Street in the East Village on Sundays. I noticed friends and acquaintances milling about outside a pub across the street and decided to check out the scene myself. Little did I know, I would soon be coming for the craic at McSorley’s rather than the service across the street.

McSorley’s had a lot in common with the church. It was dark inside and had characteristic scents that evoked piety upon entry. The wooden bar stools were not unlike church pews, but much harder to fall asleep on. The floor was covered in sawdust and peanut shells. The Irish bartenders and waiters were brusque but entertaining. On more than one occasion, song broke out among the wistful patrons, remembering the land they’d left in search of fortune... or maybe fame.

The walls were covered with aged relics of days passed, newspaper articles, and items left behind, including Houdini’s handcuffs connected to the bar rail. Wishbones hanging above the bar were reportedly put there by young men heading off to war; the ones remaining were left by boys who never made it back.

McSorley’s Old Ale House is the oldest Irish pub in New York City. It was one of the last of the “men only” pubs, admitting women only after legally being forced to do so in 1970. I had no clue I was among the early female patrons.

New York magazine considered McSorley’s to be one of New York City’s “Top 5 Historic Bars”. It was listed as a historic landmark by the New York City Landmarks Preservation Commission in 2012.

A 1904 document in John McSorley’s hand at the Museum of the City of New York declares it was established in 1854, and a New York Tribune article from 1895 states it “has stood for 40 years… a short distance from Cooper Union”. Immigration records show he arrived on January 23rd 1851, at the age of 18, accompanied by Mary McSorley, who was 16.

McSorley’s was a favourite of writers and artists, as the best Irish pubs often are, inspiring creativity through liberal libations and deep discussions. In his 1923 poem “i was sitting in mcsorley’s,” poet E. E. Cummings described McSorley’s as “the ale which never lets you grow old” and the bar as “snug and evil.”

In 1994, after the New York Rangers hockey team won the Stanley Cup, they celebrated by drinking McSorley’s Ale out of the cup and dented it.

There is only one McSorley’s Old Ale House, but Eclipse Management has opened three McSorley’s Ale Houses in Hong Kong and Macau based on the original. Although they sell McSorley’s Ale, they are not associated with the McSorley’s in New York. But if copying is the ultimate form of flattery… then McSorley’s deserves to be considered among the world’s best.

Think your favourite Irish pub abroad could claim the title of Best Irish Pub in the World (Outside Ireland)? Tell us about it by entering the competition here.