Tributes paid as boy (15) who fell from Powerscourt Waterfall named

Lewis Fleming, from Co Antrim, was on holiday when fatal incident occurred 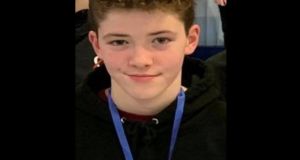 The boy who died after a fall at Powerscourt Waterfall in Co Wicklow on Wednesday has been named locally.

Lewis Fleming (15) from Ballymoney, Co Antrim, was on holiday at the Powerscourt Estate, House and Gardens when the fatal incident occurred at about 2.30pm.

Gardaí are investigating although it is understood the incident is being treated as a tragic accident. One line of inquiry is that the teenager may have tried to climb a section of the 121-metre high waterfall when he slipped and fell. He was pronounced dead at the scene.

The boy was a student of Coleraine Grammar School in Co Antrim. The school’s headmaster, Dr David Carruthers, said the school was “devastated” to learn of his death.

“The whole school community is devastated to hear of the tragic death of Lewis Fleming on holiday in Co Wicklow, which gardaí are treating as an accident,” he said.

“Lewis was a lovely young man, about to enter Year 12, who contributed hugely to school life in the classroom, on the rugby field, the athletics track and in the swimming pool. Lewis had a wide circle of friends, a great sense of fun and will be sorely missed by everyone.

“I personally found Lewis to be an engaging, pleasant pupil who was always happy to have a chat. This is a real tragedy and a terrible loss for Lewis’s whole family and for our school community. Our thoughts and prayers are with Lewis’s family at this tragic time.”

“Swim Ulster is deeply saddened to hear the tragic news of the death of 15-year-old Lewis Fleming from Ballymoney Swimming Club,” it said.

“Lewis was one of Ballymoney SC senior squad members and played a major part in the relay teams, provincial towns league, and open competitions.

“Lewis had many friends in the club and indeed the wider swimming community and the loss of his friendship and companionship will be a huge loss to all who knew him.

“Our thoughts and prayers are with him mum Gillian, dad Angus, brothers Aaron and Harris and the family circle at this difficult time.”

North Down DUP MLA Mervyn Storey said: “As the news emerged this morning of the tragic accident in Co Wicklow, it was with a sense of great sadness to learn of another family who have been bereaved in this way.

“No one can begin to imagine the sorry the family are going through. Our thoughts and Prayers are with them as they face the coming days.”

Local councillor Ivor Wallace said the community in Ballymoney was devastated by the tragedy.

“Everybody here is in shock,” he said. “The north coast has been affected quite a bit by tragedy this summer, especially when it comes to water. I would advise everyone to take as many precautions as possible when anywhere near water.”

A Garda spokesman said a postmortem will be carried out at St Columcille’s Hospital, Loughlinstown.

A second individual was rescued near the top of the waterfall by the Coastguard’s Rescue 116 helicopter.

“We were called in by the fire service,” said a spokesman. “A helicopter was requested in relation to a suspected faller. Rescue 116 was tasked and attended the scene. A second casualty was airlifted to safety. He did not require medical assistance.”

Powerscourt Waterfall is 6km from the main estate and is 121 metres high. The area is popular with climbers, although there are numerous signs at the amenity warning people not to climb the rocks above a certain level.

Minister for Higher Education and local TD Simon Harris on Wednesday night paid tribute to the coastguard for its efforts in saving the second individual.

“Such sad news emerging in County Wicklow from our beautiful Powerscourt this evening,” he said on Twitter. “Thoughts of all our community are with the family and friends of the teenager. Thank you to the @IrishCoastGuard for all their efforts.”

Powerscourt Estate did not respond to a request for comment.