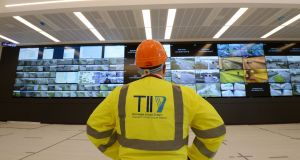 Traffic volumes on the State’s main roads almost doubled in May, and are rising by about 10 per cent on average per week as Ireland moves out of the Covid-19 lockdown.

An analysis of more than 350 traffic counters controlled by Transport Infrastructure Ireland (TII) found that traffic on main roads dropped by an average of about 70 per cent after the Government announcement on March 27th that all but essential workers should stay at home and observe a 2km exercise limit.

It remained stable at that level for three weeks before a marked increase was recorded when the 2km limit was raised to 5km on May 5th. By May 15th the volumes were 39 per cent higher than the average weekday levels recorded in the initial weeks of the lockdown.

Overall traffic volumes were 90 per cent higher than those seen in the early weeks of the restrictions by May 28th, and these are now rising by about 10 per cent a week. However, overall volumes are are still down 35 to 45 per cent lower than on the equivalent weekdays last year.

An analysis by TII on Tuesday morning found that, when compared to the same day last week, car traffic just south of the Northern Ireland Border on the N1 at Jonesboro was up 13 per cent.

It found car traffic volumes on the radial routes into Dublin was 5 to 8 per cent higher on Tuesday than on the same day last week.

The M50 (N3 Navan Road to N4 Galway Road) showed an 8 per cent increase compared with the previous week.

There was also an increase in regional cities with volumes on the N6 at Bóthar na dTreabh in Galway up 9 per cent; the N40 in Cork was up 8 per cent; the M7 in Limerick saw a 7 per cent increase and the M9 in Waterford showed a 6 per cent rise.

The latest figures show a less steep increase in traffic than that seen in the week commencing May 18th and it is expected there will a further rise is expected when restrictions are due to be relaxed further on Monday.