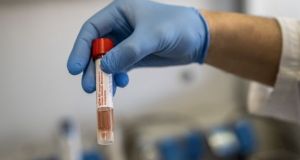 A subgroup of the National Public Health Emergency Team has considered the role and limitations of serology in a new report sent to the HSE. Photograph: Federico Bernini/Bloomberg

The use of rapid tests to determine if a person previously had coronavirus could undermine the public health response to the pandemic, a report by members of the national public health team has found.

A subgroup of the National Public Health Emergency Team (NPHET) has considered the role and limitations of serology in a new report sent to the HSE.

Unlike the test to determine if somebody is currently carrying the virus, serological (or antibody) testing can detect if a person has had the infection in the past.

Last month, the NPHET subgroup on diagnostic testing approaches discussed concerns about rapid tests. According to minutes of the group’s meeting, they also considered “the role of and the limitations of serology” and said the “the reliability of serological tests” remains an issue.

The group noted that the Health Products Regulatory Authority had highlighted concerns about “lateral flow” serology tests, which work in the same way as pregnancy tests or other rapid diagnostic tests.

The minutes stated that “there is no regulatory oversight for these tests and their availability may undermine any national testing strategy”.

The subgroup also compiled a report that said “knowing both who has had the disease, and what proportion of the population has immunity, are both potential key pieces of information in managing the spread of the disease without widespread lockdowns”.

“There is a requirement for a minimum set of performance criteria for serological assays before commencing clinical validation.”

The report said the development of an antibody response to infection may still take some time and for coronavirus, early studies suggest the majority of patients start producing antibodies between seven and 11 days post-exposure to the virus.

“Scientific peer-reviewed results for the clinical validation of commercial Covid-19 tests are highly recommended before they can be safely and reliably used for medical or public health decision making.”

The group concluded that “critical performance parameters such as the diagnostic sensitivity, diagnostic specificity and the limit of detection of the device for the given context and purpose need to be considered, clearly documented and communicated”.

The role of antibody tests in acute diagnosis appears “very limited”, the report said, noting that their role in providing so-called immunity passports remains “very uncertain”. The policy of such “passports” might have the unintended consequence of “actively encouraging people to get infected”.

It comes as the secretary general of the Department of Health Jim Breslin told the Dáil’s Covid-19 committee that there would be difficulties with a rapid testing regime for those arriving into Irish airports from abroad.

“The test that you apply, it is only at particular points in the cycle where that would identify, so you could have non-detected Covid-19 for somebody in the early days of them having contacted somebody with Covid-19. It just wouldn’t be in the respiratory tract. What you would give them then is ‘it is not detected’ and they would hear that as ‘I don’t have Covid’ and when they then got symptoms they dismiss it as, well it is not Covid, I got a test done.”