Tinsmithing and winterage on the first list of Irish intangible heritage 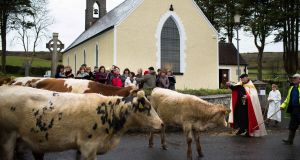 Fr Colm Cantillon blessing the herd of cattle passing through Carron village on their way to the winterage pastures, recalling a centuries old tradition that is unique to the Burren. Photograph: Eamon Ward

Not many people outside Co Clare have heard of the practice of winterage on the Burren. There the limestone soil lends itself to the unique practice of farmers bringing their cattle on to the hills during the winter and down to the lowlands in summer, in the reverse of what happens elsewhere.

The limestone keeps the soil warm enough in winter for cattle and sheep to continue grazing.

“It’s a lovely way to honour the past generations of farmers who devised these innovative practices in response to the constraints imposed by the Burren’s rocky terrain,” said Dr Brendan Dunford, Burren programme manager.

A total of 30 activities are on the list of cultural practices unique to Ireland. They constitute what Minister for Culture, Heritage and the Gaeltacht Josepha Madigan called the “threads in the cultural tapestry of our lives that make us richer as individuals and as a country”.

These include pursuits such as hurling, Irish traditional music and uilleann piping, which have an international profile.

It was a proud day too for the Travelling community, with both its language, Gammon or Cant, and the practice of Traveller tinsmithing recognised.

The list is dominated by practices exclusive to certain parts of the country. Boyne currach-making in Co Meath seeks to recreate the currachs which shipped the huge stones to make Newgrange. The mid-Kerry Biddy celebrations honour St Brigid, but have their roots in pagan worship, while the St Moling’s pilgrim’s route in Co Carlow dates back to medieval times.

The Cobh carillon – the huge array of bells in St Colman’s Cathedral, which are played from a computer console – is also included on the list.

Intangible cultural heritage refers to living forms of heritage that cannot be touched, unlike monuments such as the Rock of Cashel or Newgrange.

“It’s status and prestige for something that exists completely outside officialdom, if you will,” explained Dr Barbara Ní Fhloinn, a UCD-based archivist and folklorist who chaired the expert advisory committee which selected the list from about 80 applicants.

She recalled that committee meetings went on long after they were scheduled to end as discussion continued about the high quality of applications. “I think it is important to note the sheer love and passion which was evident in so many of the applications,” she said.

In December 2017, Ireland ratified the 2003 Unesco Convention for the Safeguarding of the Intangible Cultural Heritage.

One of the requirements was that each country had to compile its own list. No monetary gain follows from inclusion on the list, but it has boosted interest in and awareness of many arcane cultural practices.

The process is ongoing and organisations which were not successful the first time can do so again, and those who have not applied to date can submit an application.

Last year the Department of Culture, Heritage and the Gaeltacht managed to secure international recognition for hurling and uilleann piping.