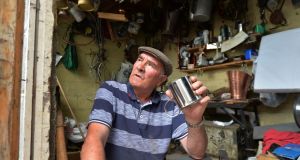 The last of the Tin Men, James Collins working away in his shed at his home in Avila Park Dublin. Photograph: Alan Betson

James Collins, one of the last Traveller tinsmiths in Ireland, welcomed the recognition of his craft offered by Unesco, but he wonders who will carry on the tradition after he dies.

Though he cannot get tin any more, Mr Collins still makes billy-cans, pails and mugs from stainless steel in his Finglas workshop, using a tinsmith’s stake – like an anvil – on which he hammers, shapes and moulds the metal.

No nails or adhesives are used. Instead everything is held together using rivets, though he also has to make these himself since they, just like the tin, can no longer be bought. Tinsmithing on Thursday it became one of some thirty practices named in the first national inventory of intangible cultural heritage.

Originally from Edenderry, Co Offaly, Mr Collins grew up watching his late father Michael make items that his mother later sold or swapped for food to farmers and labourers across the midlands.

“I was there every day with my father, watching him, and I took it up myself when I was 14. When he’d be running out of rivets I’d make them for him...The farmers needed us and we needed the farmers.

“And the farmers would give us a bit of work then – picking the spuds and pulling the beet. Or we’d spend summers cutting the turf. It was the best life I ever had.” .

Mr Collins, who moved to Dublin with his wife in 1972 to ensure his four children were schooled, believes he is one of just two Travellers left who smith with tin or steel. The other is Tom McDonnell, who also lives in Dublin and is in his 70s.

“My father done it and his father, but it is gone. I am 70 and Tommy is the same. We are the last of the tin smiths. The children today have no interest in it. Maybe if you could make something from it they would, but you can’t.

“Sometimes I go to the vintage shows and sell an odd one. It is a good thing that it’s being recognised as a craft, but who is going to do it?” Mr Collins told The Irish Times.

– Art and Practice of Falconry