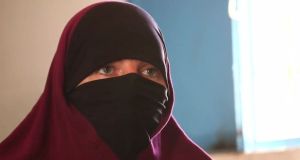 Lisa Smith: the suspected Isis supporter has said she did not commit any crimes in the name of the terrorist group

Local politicians in Co Louth have called for the Dundalk woman who travelled to Islamic State in Syria to be allowed return to Ireland, along with her daughter, once she is found not to pose any threat to the community.

Lisa Smith, a former Irish Air Corps flight attendant on the Government jet, said she did not think she would be allowed to return, in her latest media interview from the refugee camp near the Turkish border where she is being detained.

The suspected Isis supporter again said she did not commit any crimes in the name of the terrorist group that once controlled parts of Syria and Iraq, or train any young girls to fight.

“I want her child to be able to come home. I would never separate a mother and child,” he said.

Asked about difficulties associated with returning Ms Smith to Ireland, Mr Varadkar declined to comment on “military operations” but said the Government did not want to put any personnel at risk.

Louth TDs expressed support for the return of the Dundalk woman and her child once it was established she posed no threat.

Fine Gael TD for Louth Fergus O’Dowd said: “If there’s no security risk or issue, we should certainly facilitate her return. I wouldn’t have a problem with that if the security people are happy there is no issue.”

Fianna Fáil TD Declan Breathnach said: “Everyone has to show compassion regardless of what her involvement is or was with Isis.

“I have a personal view that once it is not a security issue and she is not going to influence other people back in this country in radicalism, she should be returned to Co Louth. I think she needs to prove her bona fides to the authorities. Ultimately, everyone deserves a second chance.”

Dundalk Fianna Fáil councillor Sean Kelly, who knows members of Ms Smith’s family in the town, said there needed to be a full investigation to decide whether or not she was a threat, but that he saw no reason that her return should not be facilitated if she was not.

“There is an innocent child here who has done no wrong. Once they verify that she is not a threat, I don’t see any obstacle to her coming home,” Mr Kelly said.

Her family, which he described as “highly respected, hardworking and decent people,” were also being affected by Ms Smith not being able to come home, he added.

Ms Smith told RTÉ she wanted to return to Ireland with her daughter, but added: “To be honest, I don’t think I will be going back, ever. That’s what I feel. That’s what I think.

“They could be trying to make an example of me because I’m Irish and I’m military and I’m a woman.”

The 37-year-old is being held in the Al-Hawl displacement camp in Syria for the wives and children of Islamic State fighters.

She moved to Syria, via Tunisia, in 2015 shortly after leaving the Air Corps where she worked as a flight attendant on the Government jet and as a driver to senior officers.

She served for a time with the Army as part of the 27th Infantry Battalion.

The head of the Muslim community in Ireland, Shaykh Umar al-Qadri, said that he did not think Ms Smith should be free to “roam the streets of Ireland” if she returned.

He said he would like to see a comprehensive investigation to take place involving the Garda and international law enforcement agencies with experience of questioning people who have been radicalised.

A spokesman for the Islamic Cultural Centre of Ireland said that Ms Smith’s return would be an opportunity to understand how she was recruited and what message Isis used to bring her to Syria.

“We believe in rehabilitation, in education. She is entitled to come back,” he said.