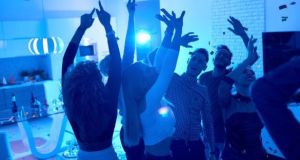 A group has been advertising tickets to “house party” events in south Dublin via a private social media account in recent weeks, in breach of current Covid-19 lockdown restrictions.

The group operates via a private Instagram account and has advertised tickets to a number of parties since the start of the year, at a time when the country is in the midst of a major Covid-19 surge.

The group are advertising a house party it claims is taking place on Thursday night near the city centre, at an undisclosed location in Dublin 2.

The group posts advertisements for the illegal parties using the Instagram ‘story’ feature, where the posts disappear after 24 hours.

Last Saturday the social media account advertised €5 tickets to a house party in Portobello, south Dublin, which it claimed was taking place that night. The Irish Times was unable to establish whether the advertised party took place last Saturday.

Two weeks ago the group advertised tickets to a party in Dublin 4 for €10, claiming a DJ would be playing music at the event. A short video posted by the group, purporting to be from the event, showed a small number of people gathered in a large room or hall, with a DJ playing music.

In posts on the private Instagram account, seen by The Irish Times, the group claim the advertised parties are “Covid-19 friendly”.

Following queries on whether gardaí were aware of the Instagram group, a Garda spokesman said “An Garda Síochána does not comment on third party materials”.

Under temporary Covid-19 laws it is an offence to organise an event in breach of public health restrictions on gatherings, with fines ranging from €500 up to €2,500, or six months in prison on conviction.

Separately, the Garda is continuing an investigation into a large illegal rave organised by a different group that took place in December in Co Laois, near Stradbally.

More than 80 people are believed to have attended the rave, with videos from the event showing people dancing together without face masks and with no social distancing.

The group had advertised tickets to the event via a private Instagram account. There was extensive damage caused to the rental home where the event took place, which the owner had let through Airbnb unaware of the planned rave.

An Garda Síochána is investigating the organisers of the illegal rave over criminal damage caused to the property and breaches of Health Act 1947.

This week a Garda spokeswoman would not comment on whether any arrests had been made in the case, only stating that investigations were “ongoing”.