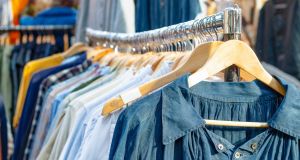 Irish consumers are shifting their search for bargains towards second hand shops for environmental, ethical and economic reasons, a conference in Limerick will be told today. Image: iStock.

Irish consumers are shifting their search for bargains towards second hand shops for environmental, ethical and economic reasons with millennials most likely to relish “the thrill of the treasure hunt”, a conference in Limerick will be told today.

The conference, organised by the Society of St Vincent de Paul (SVP) shops division, is to be addressed by Paco Underhill, the US-based best selling author whose books on the psychology of shopping include ‘Why We Buy’ and ‘What Women Want - the Science of Female shopping’.

Ahead of the conference, Underhill told The Irish Times that modern consumers were shifting away from “cheap almost disposable clothes” as environmental concerns moved centre stage.

He said retailing was moving away from the “full scale wars that Harrods had fought against Selfridge’s or Burger King had waged against McDonald’s towards to a bar fight which second hand shops can take part in and win, even against the likes of Penneys and Brown Thomas if they show creativity and a sense of humour”.

He said the used clothes market “isn’t really considered second hand any more and is becoming more of a vintage thing and retailers who recognise this can serve a duel purpose of helping economically disadvantaged people while also neing commercially viable and a fun experience for people who shop in them”.

He suggested that shopping will “change more in the next five years than it has done in the previous 50 with environmental concerns becoming a bigger deal as people look more how and what they are consuming and where it comes from”. He said high street shops which had yet to respond to consumer demand would continue to struggle to stay alive.

“The economics of 19th century retailing isn’t working today and that is what is killing the mom-and-pop store,” Underhill added.

He said savvy shoppers would “and will now” gravitate towards the charity retailer who can also provide an educational and recreational experience that strongly promotes the values and ethos of the charity”.

Mr McGilloway added that the Irish consumers “particularly the Millennial generation, enjoy the thrill of the “treasure hunt” in their local charity shop and said there was very strong competition in the field.

He said the charity’s retail division were a crucial aspect of the service the SVP provides. “Not only do they provide people with new and lightly worn items at affordable prices, they also provide an income source for the Society, which is recycled directly back into the community”.