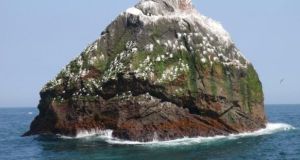 Rockall, the tiny disputed island some 400km off the Co Donegal coast.

Government officials were in contact with their Scottish counterparts on Sunday in an attempt to ease tensions in the dispute over fishing rights at Rockall, the tiny disputed island some 400km off the Co Donegal coast.

“Contacts on the territorial claim are underway between officials in various government departments,” a Government spokesman said on Sunday night. “Officials will report on the outcome of these discussions to Government, at which point a further assessment will be made.”

The Scottish fisheries minister, Fergus Ewing, had earlier said his government’s fisheries patrols would “invite” Irish fishing boats to “cease and desist” from what he said was “illegal” fishing around Rockall. If they refused, he said, “the vessel would be boarded and action taken in accordance with the law”.

Mr Ewing repeatedly said the Scottish government believes that fishing by Irish boats within a 22.2km zone – 12 nautical miles – around Rockall is illegal, a view strongly rejected by the Government.

“We will be taking appropriate action under the law to ensure illegal activity ceases,” he told RTÉ. He said that the Scottish government was clear that it would now take “enforcement action” against Irish boats in the area.

Minister for Agriculture and Fisheries Michael Creed said Ireland had never accepted the UK’s claim over Rockall and that Irish fishermen were legally entitled to fish near the rock under EU law.

He said Dublin was ready to bring the dispute to either UN or EU courts to be resolved. Sending Irish naval vessels to protect fishermen there would, he said, result in “escalating” the dispute.

Sinn Féin TD for Donegal Pearse Doherty said that if the Scottish government insisted on sending its vessels to Rockall, Irish fisheries protection ships should also be sent to look out for Irish fishermen.

Senior Irish sources were privately scathing about the Scottish action, which they viewed as a political stunt by the ruling Scottish National Party in response to pressure from the Scottish fishing industry, which is opposed to the party’s strong anti-Brexit position.

A spokesman for the Scottish government on Sunday night said there had been “an increase in that illegal activity [around Rockall] and . . . it is our duty and obligation to defend the interests of Scottish fisheries and ensure compliance with well-established international law.

“We have provided an opportunity for the Irish Government to warn their fishermen not to fish illegally in the area. We hope that this opportunity is taken up as this will of course obviate the need to take enforcement action. But we have been clear that, should the illegal fishing continue, routine enforcement action will be implemented to protect our fisheries interests.”

However, Edinburgh declined to say if vessels were already en route to Rockall. Online maritime charts showed several boats in the vicinity of Rockall on Sunday night.

Irish fishing industry representatives said they were continuing to fish at Rockall, but were “very concerned” at the Scottish move.

“To be perfectly honest it came as a bombshell, they just couldn’t believe it, that this action was being taken by Scottish authorities,” said the chief executive of Killybegs Fishermen’s Organisation, Seán O’Donoghue.

Mr O’Donoghue said about 10-12 vessels operate in the area, with “quite a number” of those from Co Donegal.

The Scottish Fishermen’s Federation said it “fully supports” the Scottish government’s stance on Rockall and that Irish vessels “have no legal right to fish within 12 nautical miles” of it.