Three deaths and 1,283 more Covid-19 cases reported in the Republic 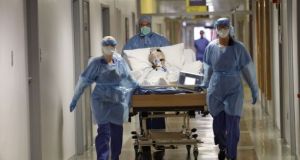 Public will accept up to 10 weeks of restrictions if there is “strong leadership”, a clear explanation of why they were necessary and a clear exit strategy, says DCU’s Prof Anthony Staines. File photograph: Alan Betson

Three deaths and 1,283 more Covid-19 cases were reported in the Republic this evening, while the North had five deaths and 1,012 more cases.

The figure of 1,283 represents a new daily high for the Republic.

The number of deaths related to coronavirus now stands at 1,852, including probable and possible deaths, and the total known cases in the State is now 49,962.

The latest figures show that there were 33 people seriously ill with Covid-19 in hospital intensive care units on Sunday morning, an increase of three on the previous day.

This is the highest number of people with the disease in critical care units since infections started rising again in the summer, but below the peak number of 160 in ICUs in April. By Sunday evening, the number had fallen to 31.

There were five admissions to ICU in the 24-hour period and three people were discharged.

There were 277 people with confirmed cases of the disease in hospital at 2pm on Sunday, with 17 people admitted in the previous 24 hours.

Of the 1,283 cases notified to the State’s Health Protection Surveillance Centre (HPSC), more than two thirds were under the age of 45 and the median age was 31.

Some 408, or just under a third of the new confirmed cases, were in Dublin.

The figure show that the number of coronavirus infections has continued to increase sharply.

There have been 11,950 new cases of the disease reported over the two weeks to Saturday, more than double the 5,114 confirmed during the previous two weeks.

Meanwhile, a leading advisor in public health policy has warned that Ireland needs “strong suppression” of Covid-19 for eight to 10 weeks to bring it under control, save lives and stop the health service from “falling on its face”.

Anthony Staines, professor of community health at DCU, said he believed the public would accept restrictions nearly as severe as the March lockdown over a 10-week period if they were given “strong leadership”, a clear explanation of why they were necessary and a clear exit strategy.

He told The Irish Times the restrictions would have to be part of a new three- pronged approach to tackling the virus. This would include severe restrictions on movement of people, but also a major increase in testing to about 200,000 rapid tests a week, and significantly increased emphasis on mask-wearing.

He said a lockdown on its own was not going to achieve elimination of the virus, because “when people come out again the numbers would go up”.

He said even the Conservative party in England, “not exactly the core of intellectual power in the world”, had accepted that serial, limited lockdowns were not going to deal with the problem. “They are looking for a way out of what we are doing at the moment.”

He praised the situation in Australia, where very severe restrictions on public movement, airport testing and mandatory face masks were introduced. He said people in the Australian state of Victoria, in particular, had been “very brave in terms of biting the bullet to nail this virus”.

Speaking earlier on Sunday on RTÉ Radio One, Prof Staines said: “One of my colleagues from Australia has just tweeted a few hours ago: ‘Numbers in Victoria, one case today, two from yesterday, down from 500 to 800 a couple of months ago. A small few countries leading while most of the world dithers clinging to a recurring lockdown strategy’.”

Prof Staines said he believed such a strategy would be accepted here even in the run-up to Christmas.

He said evidence from opinion polls which he said the Department of Health had been doing for a number of months showed there was at least quite significant public support for more restrictions. “I think the population get it.”

“Whatever happens, the strategy is going to be bringing the numbers of cases down because I can assure you the Irish health service is unable to cope with what is happening now and will be happening.”

He said restrictions aimed at bringing the numbers of cases of the virus to near zero or even single figures “would take a minimum of eight to 10 weeks, I am just being honest”.

“If there is clear political leadership people will do it”, and the country could “begin to restore the economy”, he said.

Prof Staines said what politicians needed to do was to“say we are doing it to save lives, stop the health service falling flat on its face, and to begin to restore the economy”.