Ryan may face challenge for leadership of Greens 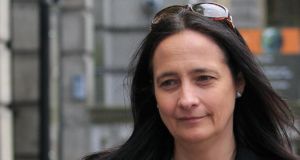 Green Party TD Catherine Martin: Some claim she would be better at standing up to Fianna Fáil and Fine Gael than Eamon Ryan. Photograph: Gareth Chaney

A move to challenge Eamon Ryan as Green leader is under way among a cohort within the party, with deputy leader Catherine Martin being urged to stand against him.

Party rules say a leadership election must be held within six months of a general election. A potential candidate only needs the support of 50 members to enter the race. The Greens have 2,700 members, up from 700 two years ago.

Sources say that nominations will open in the coming days and that more than 100 members have already contacted party officials suggesting that Ms Martin should stand.

It is not yet known if Ms Martin, who did not reply to requests for comment, wants to stand, but some suggested she would do so if enough members backed her.

Inside Politics · Eamon Ryan's long road back to power

“She is under increasing pressure as days go by and I’d say she has it under active review,” said one councillor. Another councillor said: “I’m sure if there’s enough people asking her to, she’d do her duty.”

Mr Ryan’s standing in rural Ireland and ability to broaden the appeal of the party was cited by those pushing for a contest, with his comments urging people to grow salads on their window boxes mentioned. “The ‘lettuce on the beaches’ speech was a disaster,” one source said in reference to a famous Winston Churchill speech.

It was stressed that Ms Martin’s sole focus now is on leading the Greens in government formation talks with Fianna Fáil and Fine Gael.

Both Ms Martin and Mr Ryan attended negotiations on climate policy on Tuesday, where all parties reaffirmed their commitment to the Greens’ goal of reducing carbon emissions by 7 per cent per year. However, it is understood discussions on what such a target means in policy terms will not begin until later this week.

Those suggesting she should stand said Ms Martin is not “anti-Government” but claimed she would be better at standing up to Fianna Fáil and Fine Gael than Mr Ryan. “Who would be best to pull the plug if needed?” asked one source.

The Dublin Rathdown TD was against entering coalition talks with the two parties.

A party officer who knows Ms Martin said she would be reluctant to disrupt the government formation process but may have to consider standing if a “couple of hundred” members back her.