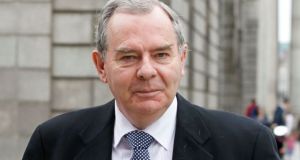 Sean Quinn’s interest in his hotels coincides with fresh approaches by the one-time billionaire to become involved in the running of his former building materials business, Quinn Industrial Holdings. Photograph: Collins

Businessman Sean Quinn explored the possibility of becoming involved again in the Slieve Russell Hotel, the Co Cavan hotel that he lost in his financial demise.

In recent months Mr Quinn met hotelier Pat McCann, a non-executive director of a number of hotels once owned by the Co Cavan-based businessman, after the Fermanagh entrepreneur requested the meeting.

The former industrialist, who lost his businesses eight years ago over an ill-fated multi-billion euro bet on Anglo Irish Bank, talked about getting involved again in the hotel.

Any decision on the sale of the Slieve Russell and the other hotels that once formed part of the Quinn family’s investment portfolio, including Buswell’s in Dublin and the Hilton in Prague, rests with the share receiver, Kieran Wallace of accountants KPMG, installed by Irish Bank Resolution Corporation, formerly Anglo, in 2011.

Mr McCann, the former Jury’s Hotels chief executive, was appointed to the board of the hotels by the bank. He declined to comment on his meeting with Mr Quinn when contacted by The Irish Times.

There was an expectation among some locals in Co Cavan that Mr Quinn’s former hotels could be put on the market following the settlement reached by the Mr Quinn’s five adult children in their long-running litigation with the State-owned bank in April. The case had frozen any sale of the businesses.

Mr Quinn’s interest in his hotels coincides with fresh approaches by the one-time billionaire to become involved in the running of his former building materials business, Quinn Industrial Holdings (QIH), now run by his one-time managers and owned by US investment funds Brigade Capital, Contrarian Capital and Silverpoint Capital.

The businessman fell out with the American funds and left his €500,000-a-year role as an adviser to the company in 2016 after the two sides clashed over his desire to take ownership of QIH again.

Mr Quinn condemned a long-running campaign of intimidation and vandalism against his former executives and businesses. The US investors felt, prior to Mr Quinn stepping aside, that he needed to take “an active approach, demonstrable over a period of time, against the increasingly negative activity in the community”, an internal memo said.

The businessman rekindled his interest in becoming involved in the business again in May 2019 when he wrote to the three investment funds, appearing to express regret for his past positions.

“On reflection, perhaps my passion for the business, and my enthusiasm to ensure that it was successful, meant that my views were not always articulated in the most appropriate manner,” he wrote.

He asked them for a meeting, saying that he felt he had “the expertise, goodwill and raw materials that are necessary to make the company successful again”.

Mr Quinn attempted to contact QIH directors earlier this year believing incorrectly that the company was about to be put up for sale. The company had engaged financial advisers Investec almost a year ago to explore a possible stock market flotation but shelved these plans because of the uncertainty around Brexit.

The Sunday Times reported at the weekend that gardaí investigating last month’s kidnapping and torture of QIH director Kevin Lunney were examining whether Mr Quinn’s approaches to buy the business were relevant to their inquiry.

Contacted yesterday by The Irish Times, Mr Quinn said there was no connection between the two. He said he had no further comment to make beyond what he had already said publicly.

He has previously denied having “any hand, act or part” in what happened to Mr Lunney.

A local source in Cavan said Mr Quinn accused Co Cavan priest Fr Oliver O’Reilly of scuppering his attempt to buy QIH through Investec when he angrily confronted the cleric at home last month after the priest delivered a scathing homily condemning the attack on Mr Lunney by a “Mafia-style group with its own godfather”.