Thousands of workers across building sector back strikes if employers cut pay, conditions 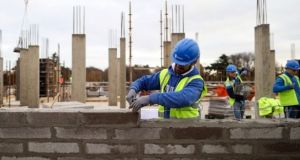 Trade union Connect said industrial action in the construction sector could also be triggered if a planned 2.7 per cent pay rise due at the start of October was not paid. File photograph: Bloomberg

Workers across the broader building and construction sectors have overwhelmingly backed potential strike action if employers move to reduce their terms and conditions.

Trade union Connect said on Monday night that industrial action in the construction sector could also be triggered if a planned 2.7 per cent pay rise due at the start of October was not paid.

Separately it has emerged that the Government is set to to amend existing financial emergency legislation which would facilitate pay increases for public health doctors.

It has been established health service policy that public health specialists should be afforded consultant status following the publication of the Crowe Horwath report on the specialty in December 2018.

The Connect trade union, which has more than 20,000 members across the construction, electrical contracting and mechanical contracting sectors said there had been a massive vote of support for industrial action - up to and including strikes - in the event of employers seeking to reduce terms and conditions.

The ballot was held after the High Court found legally -binding sectoral employment orders negotiated between employers and unions on pay and conditions were unconstitutional.

Appeal by the Government

However, the High Court subsequently deferred an order of unconstitutionality for two other sectoral employment orders covering the mechanical sector (including plumbers, fitters and welders) and the construction sector pending an appeal by the Government.

A number of other unions have organised similar protective ballots. However Connect is the only union that represents workers in all of the sectors affected.

Meanwhile the Government is set to amend financial emergency legislation which will facilitate pay increases for public health doctors.

Informed sources said on Monday that the Department of Public Expenditure and Reform would draft amendments to the existing financial legislation which currently prohibits pay increases for serving public servants.

It is understood that a memorandum will be prepared for the Cabinet before the end of September.

The Department of Health last week told The Irish Times that it, the Minister for Health Stephen Donnelly and the HSE were “committed to the early introduction of a new model for public healthcare, as provided for the Programme for Government, and to the model incorporating consultant status for public health specialists”.