No new deaths and more than half of cases in Dublin; Nasal swab test agreed for children 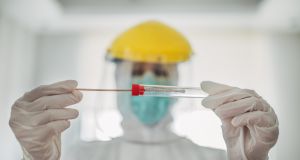 Patients who test positive for Covid-19 are being advised to self-isolate for ‘a minimum of 10 days’ from the onset of symptoms. They must also go five days without fever. Photograph: Getty Images

Some families may have to restrict their movements for 17 days if a young child in the house tests positive for Covid-19, under new HSE guidelines.

All members of the household, along with other children in the same pod at school, are considered close contacts where a child tests positive, under the revised guidelines from the HSE’s Health Protection Surveillance Centre.

Such contacts are required to restrict their movements for 14 days after the last exposure to the case, the guideline states. However, this period rises to 17 days from the onset of symptoms in the index case “if the child with Covid-19 can’t be isolated at home and there is an ongoing exposure risk”.

Any decision on whether a household can self-isolate will be taken on the basis of a public health assessment.

The guidelines apply to children aged over three months and under 13 years. Doctors recognise that young children may struggle to adhere to distancing and hygiene rules required to prevent the spread of Covid-19.

Classmates of the child who tests positive, who are not in the same pod, may continue to attend school but their symptoms will be monitored, according to the guidelines.

This comes as the period for which adults with Covid-19 are required to isolate is being cut from 14 days to 10.

Under new guidelines, patients who test positive for the virus are being advised to self-isolate for “a minimum of 10 days” from the onset of symptoms, or 10 days from the date of the test if asymptomatic. They must also go five days without fever.

Where a person with Covid-19 symptoms tests negative, they are advised to self-isolate until 48 hours after resolution of their symptoms.

New guidelines for children under 13 provide for testing based on nasal swabs, rather than the nasal/throat swabbing currently in place.

The new advice is contained in revised guidelines for GPs from the HSE and the Health Protection Surveillance Centre.

The change from 14 days to 10 does not apply to contacts of confirmed cases who have been tested, or to people arriving from countries other than those on the Government’s green list. These groups are still required to restrict their movements for 14 days.

Acting chief medical officer Dr Ronan Glynn said the National Public Health Emergency Team (NPHET) had decided to reduce the period of isolation from 14 to 10 days for confirmed cases from the onset of symptoms, based on advice received from the expert advisory group following a review of the evidence.

“In addition, it has been agreed that nasal swabs are an acceptable alternative to nasopharyngeal swab for use in children in the community. This will hopefully make testing a simpler process for children going forward.

“Covid-19 is an evolving pandemic and NPHET is committed to adapting advice and guidelines based on emerging evidence,” he said.

Another 208 confirmed cases were reported by NPHET on Monday night, including 108 in Dublin. There have now been a total of 31,192 confirmed cases in the Republic. There were no new deaths, leaving the number of Covid-19 deaths at 1,784.

Of the new cases, 108 are in Dublin, 18 in Louth, 12 in Donegal, 10 in Meath, nine in Kildare, eight in Waterford, seven in Cork, six in Limerick and Wexford. The remaining 24 cases are located in Carlow, Cavan, Clare, Galway, Kilkenny, Laois, Longford, Mayo, Roscommon, Tipperary, Westmeath and Wicklow.

Some 62 per cent of cases are in people under 45, and 33 per cent are associated with outbreaks or are close contacts of a confirmed case. No figure for the number of cases linked to community transmission was given.

The recommended change in tests for children was welcomed by Kildare GP Dr Brendan O’Shea. He said nasal swabs are easier and quicker than nasopharyngeal swabs which are arguably invasive if done properly. “Hopefully it will make the testing quicker and easier,” he told RTÉ Radio.

“From a very practical point of view nasal swabs for kids would have to be easier than nasopharyngeal swabs.” He said parents and teachers are “tormented by this issue” and anything that makes it easier is welcomed. “We would welcome this as a recommendation,” he added.