Just 1,400 businesses of 57,000 contacted during summer sign up for customs number 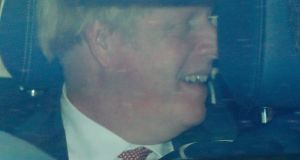 Just one in 50 traders contacted in July that had then not registered for a customs number to trade with the United Kingdom after Brexit have since signed up, new figures show.

The Revenue Commissioners wrote to 57,000 businesses that have traded with the UK in the past year-and-a-half which had not signed up for customs registration – a requirement for continued trading with the UK regardless of whether it strikes a trade deal with the UK or not.

Traders will need an Economic Operators’ Registration and Identification, or EORI, number to be able to make customs declarations if they intend trading with the UK after it leaves the EU’s single market and customs union following the economic Brexit on January 1st, 2021.

The Revenue has said that just 1,400 businesses registered for customs by getting an EORI number between the time the letters were posted on July 17th and Thursday last.

The Revenue has started intensifying Brexit preparations by telephoning businesses that are likely to be significantly affected by Brexit based on their volume or value of trade with the UK.

“A business may already have taken steps or may be planning to take steps to, for example, source goods and materials from elsewhere in the EU and avoid any element of UK trade, including transit of goods through the UK,” said a Revenue spokesman.

“In any scenario, Revenue is stressing the importance of getting Brexit ready now and being Brexit ready from January 1st, 2021. We will support and assess business in that process.”

Tánaiste Leo Varadkar said on Monday that the UK risks becoming “a shadow of its former self” if the British government proceeds with a law that breaches the Brexit withdrawal treaty.

The Fine Gael leader said that the UK’s proposed Internal Market Bill was a “mistake” and hoped that Boris Johnson’s government would “reconsider” proceeding with the legislation.

The EU and UK are at odds over the British domestic legislation that the UK government has admitted would breach international law and violate the Brexit withdrawal treaty signed this year.

Mr Varadkar told reporters at an event in Co Kildare that if the legislation was a negotiating tactic in the deadlocked talks on a future EU-UK trade deal, then it “has now backfired”.

Countries “all around the world” including the United States were questioning whether the UK was a country with which it could conduct any deal or treaty with in future, the Tánaiste said.

Former UK prime ministers such as Tony Blair, John Major and David Cameron were not just opposed to the Bill but so too were “hardline Brexiteers” such as Lord Lamont and Lord Howard who want a UK that can negotiate trade deals but who were now saying “this isn’t Brexit”, he said.

“If the United Kingdom becomes a country that no longer honours treaties, that doesn’t respect international law, well there is no country that is going to want to deal with them,” he said.

Mr Varadkar expected the Bill to have “a rough ride” in the House of Commons and there was a “high probability” that the House of Lords would reject it, making it hard for it to advance.