Kathy Sheridan: Why should Ireland fix Brexit for Britain?

British prime minister Boris Johnson says that the Northern Ireland backstop needs to be abolished if there is to be a Brexit agreement between the UK and the EU. Video: UK Parliament TV 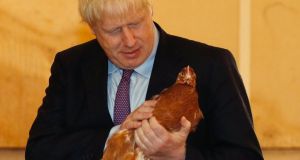 The carping about Ireland’s naivety, obduracy, self-sabotage, green jersey-wearing, stooge-of-Brussels act (take your pick) on the Border backstop is creeping beyond the fringes here.

The attitude has of course been rife in England since they finally copped on to the Border problem and responded by appointing the most staggeringly ignorant Northern Ireland secretary in imperial history.

It was inevitable that the Dambuster-themed Brexit campaign would end with a “(civil) war cabinet”.

They don’t give a toss about the backstop. No tweak in the galaxy will divert the no-deal tendency from its glittering destiny. British prime minister Boris Johnson wants the backstop axed, “whole and entire”.

Remember: this is about much more than the backstop. Remember: two-thirds of Scotland voted to stay in the European Union.

Remember when two-thirds of Conservative Party members said they would prioritise Brexit above “significant damage” to the economy or Northern Ireland breaking from the union?

This is now the ruling tribe.

All the rest is blame-shifting – which is where Ireland comes in.

Last week, a Daily Mail columnist wrote that the Brexit secretary had been to Dublin “and read the riot act to pipsqueak Irish Prime Minister Lenny Verruca, reminding him on which side of his bread he’ll find the Kerrygold”.

Yes, it’s hard to move on from that stone-cold, Wildean wit but the point of the piece is that “as a consequence” of Scary Daddy’s finger-wagging, Taoiseach Leo Varadkar is coming under “serious pressure at home to stop playing silly beggars on the so-called backstop”.

The story is a lie, which makes the agenda more interesting. Last week, Daily Telegraph sources were saying that a visit to Dublin was considered too “risky” for Johnson, but even a fairly obscure Brexit minister would hardly go unnoticed roaming the Irish capital seeking the Taoiseach (who was probably in the far end of Donegal).

In short, someone concocted a yarn to suggest that Britannia was back in the game and the Irish were already caving under the imperial lash. Colour us shocked.

With that, the scattering of Irish voices urging a stand-down has been suddenly amplified. The message to the mob is to step back from the tribalism. Which is rich, given the lie-sodden, Union Jack-blanketed, spittle-flecked, internecine nature of the Brexit campaign, parts of which are still under criminal investigation.

Among those reincarnated in Johnson’s cabinet is the new home secretary, Priti Patel, ardent Leaver and death penalty enthusiast, who was fired as international development secretary two years ago for running a freelance foreign policy in the Middle East. Round here though, she is remembered for suggesting that Ireland could be starved into submission, causing the BBC’s John Simpson to ask: “Have we learned nothing since the 1840s?”

Yet, for some reason, the pressure is piling on Ireland fix this, to restore England’s dignity and reputation. By doing. . . what exactly?

The Sunday Independent’s main headline on Sunday, based on its latest Kantar poll, was unequivocal: “Varadkar’s tactics fuel Brexit fears”.

It was a bold take. Kantar’s Paul Moran adduced from his respondents’ softening support for the EU and the Taoiseach’s strategy that Ireland was getting “somewhat queasy” about the whole thing.

Varadkar attracted just 43 per cent approval ratings, both as Taoiseach and Brexit dealer. His satisfaction rating as Taoiseach had fallen to a miserable 36 per cent in the last Irish Times/Ipsos MRBI poll, so he might view the latest as a win.

It was the just 43 per cent satisfaction rating for his Brexit strategy that raised eyebrows. But just over a quarter were definitely “not satisfied”. We don’t know why.

In particular, we have no idea what lies behind the shruggy 22 per cent who are neither “satisfied” nor “not satisfied”. Combined with the 8 per cent “don’t knows”, they add up to 30 per cent, outnumbering the “not satisfieds”. Who are they?

Do some want a backstop compromise? Do they believe we should leave the single market to avoid a hard border? Are they concerned that a crash-out Brexit would lead to a hard border anyway? If these are indeed their (serious) concerns, why not simply tick the “not satisfied” box? We don’t know.

Instead, Moran speculated that “we don’t know how to handle the mantle of being in control”, that maybe it’s about Varadkar’s approach, that “his robust musings, jars with our psyche”, that people are concerned with Ireland’s “megaphone diplomacy” in “these trying times”. It’s all possible but if so, why not tick the “not satisfied” box? Or is it about something else altogether?

Yes, everyone should dial back the rhetoric. Ideally, political participants should cease the pointless wounding and or bullish commentary on social media. But is it entirely up to the pipsqueak to move the dial for Scary Daddy? Let’s have a poll.

1 Parents jailed over female genital mutilation of daughter
2 No obvious signs of injury on remains of McGinley children
3 ‘Wonderful boys’: McGinley children will be greatly missed, school says
4 Why our love for Leo is withering on the vine
5 The notorious Donald John Trump goes on trial
Real news has value SUBSCRIBE