We must consider revisiting the ‘Northern Ireland only’ backstop 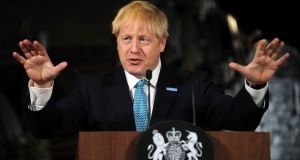 Boris Johnson: Under cover of anti-EU bluster and no-deal threats, might he first try for a revised backstop? Photograph: Rui Vieira/PA Wire

Is Boris Johnson using the so-called “anti-democratic” backstop to pick a fight and then win a chauvinistic general election by blaming the EU? Or, under cover of anti-EU bluster and no-deal threats, might he first try for a revised backstop?

How annoying it must be for him that the Irish backstop is “the tail that wags” his Great Britain “dog”. Apparently the EU will be frightened into “binning the backstop” by his threat of a no-deal Brexit and ensuing chaos.

However, Johnson knows that the EU will only negotiate a future UK trade deal after protection of its single market is guaranteed in case negotiations fail. A backstop where adjacent UK territory continues in compliance with single market regulations provides that guarantee. Without it there would have to be a hard border and customs checks between Northern Ireland and the Republic which nearly everyone claims not to want.

It would be extremely disruptive – economically, politically and socially – and still not stop smuggling into the single market. The no deal damage would be greatest in Ireland North and South; relatively greater in Great Britain than in the larger EU; and – most importantly to Johnson – he knows he would get most of the blame.

So we can assume he doesn’t actually want no-deal Brexit, but it is the default outcome unless he gets majority support for an alternative. A revised backstop seems his best chance . It would be ironic if his Great Britain dog found salvation in an Irish tail.

Former prime minister Theresa May’s version, agreed with the EU but strongly rejected by MPs, involved the entire UK territory staying in the single market. But it prevented Britain doing its own trade deals across the world, for many Brexiteers the whole point of Brexit; and they feared it would trap them in the EU. So they proposed various “solutions” including a time-limited backstop, rejected by the EU as not a proper guarantee, and border technology not yet invented, useful perhaps as a smokescreen but not for stopping smugglers.

A more plausible option – forgotten by many – would be the EU’s original “Northern Ireland only” backstop where compliance with single market regulations applied only to the North. It was May who extended it to Great Britain because she depended on the 10 votes of the DUP which objected to an “Irish Sea border” and separate treatment for Northern Ireland.

The “NI only” option would be acceptable to the EU, and would enable Great Britain to do its own deals – as long as imported goods not complying with EU standards (eg hormone-injected beef) were stopped from getting into the North and hence the single market.

“Sea border” controls (which already operate at ports and airports) would be much less disruptive and much more efficient at stopping smuggling than a hard but porous land border. It would also be much more in line with majority popular and commercial opinion in the North. Many in fact see it as the North “getting the best of both worlds” – full access to markets in the EU and in Britain – instead of suffering most from no deal.

Here the DUP is unrepresentative, out on a limb using spurious arguments. They claim the North would be cut off from its main export markets in Britain, but the “sea border” is for stopping non-compliant imports (eg chlorinated chicken) getting into the single market, not stopping the North’s exports to Britain. They complain that separate treatment would undermine Northern Ireland’s constitutional status in the UK, but it is already treated separately from Britain in many ways (including with DUP support for separate laws on so-called “moral” issues), without its constitutional status being affected.

Guaranteed by international treaty, its status can only be changed by majority votes North and South in a “Border poll” – something that is more likely to happen if there is no deal chaos.

There is of course one reason for taking the DUP seriously – its 10 votes which propped up or wagged May’s minority government. However, while Johnson’s no-deal threat will not frighten the EU into “binning the backstop”, it could frighten enough of his fellow MPs into supporting a revised “NI only” backstop without any need for DUP votes.

Getting rid of that particular Irish tail would please a lot of people not only Johnson’s cabal, whether it were to happen before or after a general election.