The Irish Times view on the Johnson/Varadkar phone call: an important first engagement 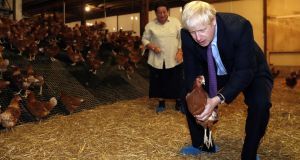 The phone conversation between Taoiseach Taoiseach Leo Varadkar and British prime minister Boris Johnson was a welcome development. While there was clearly no meeting of minds on the vexed question of the Border backstop, the fact that the two men had an amicable conversation was important.

Whatever strains develop as the Brexit question comes to a head, it is vital relations between Ireland and the United Kingdom remain as friendly as possible. The two countries have too many common interests, not least Northern Ireland, to allow differences on a major issue like Brexit to poison future relations. There had been a little surprise in Dublin that the new prime minister didn’t make the usual neighbourly phone call to the Taoiseach in his day or two in office but there was also an appreciation that Johnson had big decisions to make about the course he intends to pursue on Brexit. Both sides described Tuesday’s conversation as warm and friendly. The Taoiseach took the right approach in congratulating Johnson on his appointment and wishing him well before getting down to business. By all accounts the two men managed to spell out their differences in a civilised manner.

The Taoiseach stressed to the prime minister that the backstop was necessary as a result of decisions taken in the UK and by the UK government and he noted that the Brexit negotiations took place between the UK and the EU. It was important that Varadkar spelled this out as there is a widespread perception in the UK that the backstop is a purely Irish invention which might easily be discarded by the EU if enough pressure is put on Ireland.

Johnson told the Taoiseach that the UK would be leaving the EU on October 31st, no matter what, saying that his clear preference was to leave with a deal but it must be one that abolishes the backstop. While he added that the British side would approach any negotiations with determination and energy in a spirit of friendship it was clear that he is holding firm to his opposition to the backstop. On a positive note, the prime minister expressed his commitment to the Belfast Agreement and his unequivocal support for the current talks, saying that he wanted to continue to work closely with the Irish Government to help drive the process towards a successful conclusion.

While there is no disguising the depth of difference between the two governments on the backstop it was encouraging that the two leaders agreed on the requirement of maintaining the Belfast Agreement and the restoration of the Northern Assembly and the power-sharing institutions at Stormont. The significance of those issues should be kept in mind during the tense times ahead.

1 Gardaí believe men in Cork murder-suicide chose to let woman survive
2 Richard Ford: America could fail. I have never felt this way before
3 ‘In Crete I pay 70% of what I paid for a shoebox apartment in Dublin’s docklands’
4 Supermarkets compared: How Dunnes, Lidl, Tesco and M&S measure up
5 Jack Nicklaus’ Trump endorsement leads to avalanche of dismay
Real news has value SUBSCRIBE