The elite group who have run every Dublin marathon 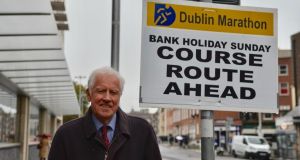 Dr Donal de Buitléir who has run every marathon over the last 39 years and is hoping to complete his fortieth today.

Dr Donal de Buitléir has run every marathon over the last 39 years and is a member of select “39 club”.

This afternoon, all going well, he will join the 40 club.

There are 13 members of in the 39 club, according to sports journalist Sean McGoldrick in his new recently published book The Dublin Marathon - Celebrating 40 Years.

These 13 runners received special medals to mark their achievement before the start of this year’s marathon.

There used to be more than 20, but age and injury have taken some and others have gone to the great starting line in the sky.

Being part of that elite club would be enough accomplishment for many people, but Dr de Buitléir also has a professional life of success in both the public and private sectors.

He turned 70 in August, but the only slowing down he is doing is in relation to his marathon times which have got progressively slower since he ran the first one in 1980.

His CV is a marathon read in itself. He has been a senior civil servant in the Department of Finance, an Eisenhower fellow, a director of an Atlantic Philanthropies think-tank, publicpolicy.ie, and a member of the HSE board.

In January he took over as the acting director-general of the Institute of International and European Affairs (IIEA). He is also the chairman of the Low Pay Commission.

In the last month he has appeared in front of two Oireachtas committees, the first on low pay, the other as the chair of a Government-appointed group looking into private activity in public hospitals.

He was 30 before he ran his first marathon.

“A few of us used to go down from the Department of Economic Planning at lunchtime and we shared a dressing room with Noel Carroll (former Dublin Corporation spokesman, Olympic runner and marathon founder). Nobody had even heard of the marathon at the time,” he said.

“I thought, ‘how can anybody even run 10 miles?’. I started training. It’s extraordinary the limits you put on yourself. If I had discovered running earlier and trained properly, I could have been quite good.”

He ran his first marathon in 3 hours and 26 minutes. His fastest time was 2 hours 56 minutes in 1985. His slowest time is 5 hours and 29 minutes. Last year he finished the marathon in 5 hours 10 minutes.

It is an extraordinary feat of endurance and durability to be able to participate and then finish the Dublin marathon. “Getting to the starting line without being injured says something about your luck. I never did enough training to get injured,” he says smiling.

“It’s not the taking part that counts,” he states, “but the finishing even if it means limping home.” One year he pulled a muscle with 10 kilometres to go.

“If you crawl, you must finish.”

How does he get time to prepare for marathons? He doesn’t, he says, and only gets out to run in the Phoenix Park at weekends. In the last 10 weeks, he has done 100 miles. “It’s not enough, I’m busy. I’m doing too many things. At my age you should run every second day,” he says.

Nevertheless, he approached the start line with a mixture of excitement and trepidation. His four children will be there at mile 23 to cheer him on. “You try and get into a rhythm. The crowd are great. They keep you going. You’re just like a boxer - one last fight.”