The Drunkenness (Ireland) Bill 1905: ‘Needlessly offensive to every Irishman’ 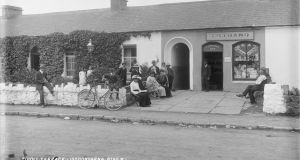 In the House of Commons, members were considering amendments to a Bill, which Irish Nationalist MP for South Louth, Joseph Nolan, condemned as “uncalled for, ill-considered, mischievous in its provisions, and needlessly offensive to every Irishman who had any regard for the fair fame of his country.”

Nolan’s comments were reported in The Irish Times the next day, on July 8th, 1905. The Bill’s provisions – which would pass into law in November 1908 under a different name – had broad support in the House of Commons. Among other things, it aimed to financially protect the spouses of “habitual drunkards” – both husbands and wives – and set penalties for those found to be in charge of a child while drunk. It also made it an offence to buy a drunk person a drink in or around a licenced premises – those found guilty were liable to “a fine not exceeding forty shillings, or to imprisonment, with or without hard labour, for any period not exceeding one month.”

Nolan took issue with the idea that Ireland was a special case, with a uniquely drunk-enough population to require its own measures, “as if drunkenness were more prevalent there than in England, Scotland or Wales.”

Perhaps he was right. But generally speaking, “intemperance” among the Irish population had been a point of debate which frequently appeared on the pages of The Irish Times up to the point of Nolan’s defence of the “fair fame” of Ireland. The debate was less about its existence – there was unquestionably a problem – but rather, the solution.

A search for “drunkenness” and “Ireland” in the archive of The Irish Times throws up some interesting results. The temperance movement was gaining huge support worldwide during the 19th century, and Ireland was no different. Any amount of organisations sprouted in the name of abstinence from alcohol – many, many meetings on the topic followed. Drink was linked to just about every “evil” imaginable.

Sweden comes up a lot. On August 17th, 1860, The Irish Times published a story about a meeting of the Blackrock chapter of the Hibernian Bible Society, which heard how the gospels had made their way through Sweden, where the drink had previously taken hold. “In Sweden… which had been remarkable as one of the countries where drunkenness was a plague, a wonderful revival had taken place and the Scriptures were spread through the land with the most encouraging result.”

Directly underneath the story, suitably, was a report about the meeting of the Total Abstinence Society at Dublin’s Metropolitan Hall, addressed by Benjamin Benson, an agent for the Irish Temperance League in America. Benson, who would later become the proprietor of a temperance hotel and restaurant in Dublin, was a black man – and in his address, he inextricably linked strong liquor and slavery. This came less than three years before the Emancipation Proclamation.

The Irish Times reported: “Mr Benson was first introduced to the meeting, and having alluded to his being of African descent, said there existed prejudices against the Africans as they had lost their national character. It was also a melancholy fact that slavery and intemperance went hand in hand together. Strong drink is the father of slavery, and was so from the time of Noah and the patriarchs to the present hour.”

The same association, in the same location four years later, held a similar sort of meeting. A petition was read that said the “common sale of intoxicating liquors is the chief cause of the drunkenness, immorality, lunacy, crime and pauperism of the nation.”

Lunacy is an interesting one. Census reports from the 19th century list the number of “lunatics” per county, along with the causes – which are broken into “moral & mental” and “physical”. The first group contains the likes of: grief, terror, religious excitement and reverse of fortune. The latter held “causes” such as: head injury, epilepsy, nervous system disease and intemperance. In 1881, for example, the census reports list “intemperance” as the second most common “physical” cause of lunacy.

Those “lunatics” who were deemed to have induced their own condition through drinking did not garner unanimous sympathy. At the annual meeting for supporters of the “Stewart Institute for Imbeciles” in January 1875, a doctor named Banks said the residents there were “more emphatically objects for their commiseration than the lunatic who brought on insanity by drunkenness, for intemperance was one of the most fertile causes of mental disease.”

Moral and social problems were, of course, a common talking point. In a Christmas Eve editorial in 1874, The Irish Times weighed in. “There are some, too, who think that Christmas is a time for debauch and drunkenness, and for the robbery of their children’s food,” said the piece, perhaps in an attempt to rouse the consciences of would-be imbibers. “May the voices of our old temple bells, sweeping over houses and rolling merrily yet tenderly along the pavement, stop them in their course and tell them that Christmas is the one festival of the year which should hallow wife and child and home.”

Crime was probably the largest selling point. Drunkenness itself was a crime punishable by light sentences, but it was seen to be at the base of many other, more serious crimes. Consequently, as the century progressed, the 1870s saw a fresh push to close pubs on Sundays. By the late 1870s, Sunday was identified frequently in Irish Times reports as the drunkest day of the week.

A letter written by then Catholic Cardinal Paul Cullen in March 1870 illustrates the attitude of those backing Sunday closing:

“Almost all the crime we have to deplore in Ireland may be traced to drunkenness; and as long as the doors of the public-house stand open during the leisure of the Sunday, it will be very difficult indeed to root out from among our people that degrading vice.” Cullen called for legislation to impose the Sunday ban, for the “spiritual and temporal welfare of our excellent people”.

Religious figures were anti-liquor, generally. A number of bishops, in the absence of legislation, told people to refrain from drink on Sundays, with (they said) apparent localised success. The Irish Times wrote of the Bishop of Cashel, upon his death in January 1875 that he had “waged war” against drunkenness – but he was far from the only one. In Bessbrook, Co Armagh, a no-drink-on-Sunday policy had led to there being no need for police – at least, that’s according to a member of the Irish Sunday Closing Association, speaking in October 1875.

A Bill was passed into law to shut the pubs on Sundays in all but the cities of Dublin, Limerick, Waterford, Belfast and Cork – though publicans could sell liquor to “bona-fide” travellers of long distances – more than three miles. It came into effect on October 1st, 1878 – initially for a trial period of four years – and was met with relative compliance. Confusion remained around some issues – how could a publican tell how far a self-proclaimed traveller had come? The Irish Times even ran an “ask the expert” type Q&A with Isaac Butt on October 5th.

Whether it actually worked or not is another matter. Initial results after six months indicated a steep drop-off in arrests for drunkenness. Editions in later years, however, carried stories that claimed the exact opposite, and said that drunkenness had intensified in counties and towns to which the Act applied. Unsurprisingly the victuallers’ association was of the latter opinion.

The numbers often supported the pro-Sunday closers, however. By December 1881, There had been a reported 9,403 fewer arrests on Sundays, and 22,855 over all. Between the implementation of the Act and the end of 1880, there had been a reduction in the consumption of wine and spirits to the tune of nearly £3 million, according to the Act’s supporters.

The focus of the Sunday Closing Association turned to expanding the remit to the five cities, but that was strongly opposed. The Act, when it expired after the trial, was renewed yearly under the Expiring Laws Continuance Act. This went on for 24 years, when the Act was made permanent in 1906, and the hours of sale in the big cities reduced from five (2pm – 7pm) to three.

The argument for the Sunday closures was that if temptation made the thief, then the provision of strong liquor made the drunkard. But The Irish Times, which was critical of some of the political tactics used to oppose the legislation, didn’t actually agree with the idea at the outset. “If all public houses were closed on Sundays there would still be drunk men and women,” reads an editorial from February 3rd, 1877 – a piece which echoes closely some arguments already being made against the potential restriction of off-licence hours in 2020.

Supporters of the movement, the paper said, “would find that it is Saturday night’s supply which makes the inebriate on Sunday, and the galvanised drinker on Saint Monday, and the wo-begone, half silly, half mad man on Tuesday.” A half-pint jug – some of them “very neatly moulded to fit into the breast pocket of the vest” – cost one penny back then. You could fill that with spirits on a Saturday, Act or no Act.