‘Time has given the mere Irish their revenge . . . of hue she approaches our decent Irish letterbox’ 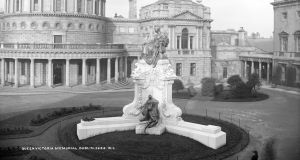 The statue of Queen Victoria in Dublin, dated after 1908. Photograph: National Library of Ireland/Flickr Commons

“As I watched, another workman appeared, clambering over her head, gripping her sometimes by the nose and occasionally sticking a finger into her disdainful eye. Perhaps it was just the effect of the glistening rain on the bright, green copper, but it seemed to me that the old lady - never exactly pleasant-looking at the best of times - was glaring about with loathing and disgust.”

So reads an account in The Irish Times of the removal of the controversial statue of Britain’s Queen Victoria that stood for more than 40 years at Leinster House.

The scenes are described in the Irishman’s Diary of the following day, July 23rd, 1948. She’s depicted on the front page, too - suspended by machinery as people look on. “Ministers, ex-Ministers and Dáil deputies stood around in the rain, waiting. There were crowds on the steps of the Museum and the Library and there were cameras everywhere. Meanwhile the workmen worked away with that maddeningly measured, deliberate air of men who know that they hold stage.

“Several times we thought the big moment had come - once she did lurch from her pedestal for a second or two and creak back again - but just as everything was adjusted it would start to pour and everyone would have to rush for shelter.”

In the end, Quidnunc missed the finale. “For a while longer I watched the men adjust and readjust the girths around Victoria’s middle then I had to go up to the Leinster Bowling Club to see the South African match. When I returned, Victoria was missing from her pedestal.” The statue was later moved to Kilmainham.

The piece - comical, yet dry and straightforward - unflatteringly describes an audience and spectacle much different to that on the day the statue was erected.

Searching for references to Dublin’s statue of Queen Victoria throws up a couple of parallels in the archive of The Irish Times. There’s the statue of Victoria erected in 1939 in Menton, France; pushed into the sea when the Italians came during the second World War and later replaced. Further back, in November 1908, there was the “outrage” at the public gardens in the Indian city of Nagpur, where a statue of the queen was “mutilated; the face daubed with tar and the nose and fingers broken.”

In the years between Victoria’s visit to Ireland in 1900 and the unveiling of John Hughes’s statue in 1908, mentions of a public fund set up for its commission are plentiful. In the days before the unveiling, tickets for the ceremony were advertised - the price of admittance was one shilling, payable at the front hall of Leinster House. The aim, said one report, was to thin the anticipated crowd.

The day she was unveiled - February 15th, 1908 - was, like the day she came down, punctuated by rain. “The ceremony was made the occasion of an imposing military display, but the lustre of the pageant was to some extent marred by a somewhat heavy shower which fell shortly before the formal part of the proceedings commenced,” reported The Irish Times.

Detachments of soldiers began to arrive from 2pm, for the unveiling at 3pm. “About 1,000 troops were on parade and as the various battalions, dressed in review order, with their bands, arrived on the scene they took up their allotted positions with bayonets fixed, forming a wide circle round the greensward, in the centre of which stood the memorial, with the beauty of its magnificently formed bronze figures as yet unrevealed.”

The string would be pulled, the Lord Lieutenant’s speech made and the applause would ring out - as far as the report goes. The Irish Times hailed the statue as “a noble addition” to Dublin’s monuments, praising the sculptor John Hughes.

As the years wore on, the lauded aesthetics of the piece would be repeatedly called into question. As Randolph Churchill wrote in an article published on the front page in November, 1945: “The largest and ugliest statue in Dublin is outside the Dáil, and is of Queen Victoria - denounced throughout Ireland in the last century as the famine queen.”

The statue and the merit of keeping it in situ quickly became a topic of debate. In line with the struggle for Irish independence and rejection of imperialist Britain, the controversy crept into news coverage - particularly following the conclusion of the War of Independence and signing of the Anglo Irish Treaty in 1921. The arguments for and against removing the statue will be familiar.

On the latter point, a letter writer in 1933 - when the statue was 25 years old - said: “At one time a new dynasty arose in Egypt, and, defacing all the monuments of an earlier age, earned the universal condemnation of all historians. It is to be hoped that we are more enlightened.” Another - a decade later - pondered whether it would be better to keep it in place, owing to its potential as a tourist attraction.

In the latter part of 1943, the issue again hit the pages of The Irish Times when the Dublin Corporation passed a resolution requesting the government to remove the statue. The story was carried on the front page the next morning, on September 7th.

Proposing the resolution, Councillor Micheál Ó Maoláin said it was odd that “the effigy of a lady whose name stank in the nostrils of past generations of Irishmen” should stand in front of Ireland’s Parliament House, while Lord Edward Fitzgerald had been forgotten. Every generation, he warned, would rise and revolt at the sight of it.

On the same day, the leader in The Irish Times took a more moderate view compared to “the heat of Mr Ó Maoláin’s feelings”, yet gave the councillor credit on two counts. “Firstly the city would not be any poorer for a monument to Lord Edward, who was a patriot in a sense which is hardly understood nowadays. Secondly, if the Old Queen must be removed, Mr Ó Maoláin will have it done by law and not by dynamite.” The piece mentioned the explosion at Stephen’s Green in 1937 that brought a large statue of George II and his horse to the ground.

The article also suggested it would be better to remove the statue than allow it to endure further neglect. “If it is true that the statue has never been cleaned since the signing of the Treaty - and certainly its musty green hue gives credit to the story - the joke is rather a poor one and reflects more discredit upon the House of Windsor.”

The same “green hue” would catch the eye of Myles na gCopaleen (Brian O’Nolan/Flann O’Brien) the following month - albeit, he had a much different take. Over all, the writer was not overly bothered with its removal - her statutes were more harmful than her statues, as he put it. “Besides, look at it this way,” he wrote on October 2nd. “Time has given the mere Irish their revenge. The fact is that Victoria has turned green. Of hue she approaches our decent Irish letterbox. And it is the price of her.”

In the days after the resolution was passed, cold water was thrown over the project. A story on the front page on September 8th reported that Victoria would be removed, just not yet. Costs were blamed.

On November 1st, members of Ailtirí na hAiséirghe - a minor fascist party described then as a Gaelic revival organisation - crashed a Dublin Corporation meeting and shouted from the public galleries: “Get rid of all the symbols of slavery in the streets.” The episode made the front page of the paper and was reported in the British press.

It would take until July 22nd, 1948, before the statue came down. Reports about the monument soon died off, bar one or two concerning potential Canadian buyers - the cities of London and Peterborough sought to purchase the statue in 1949, by which point it had “lain on its back in a field in Kilmainham”. But that fell through.

In the end, it would be sent to Australia. The Irish Times reported the move ahead of time in a report on October 2nd, 1986, headlined: “Statue of Victoria given to Sydney.” Not quite the ending predicted by The Irish Times in 1943, when it said the structure would be removed “possibly to some new and friendly site, more probably to the scrapheap”.