Ireland and alcohol: Have we always seen ourselves as a nation of drinkers? 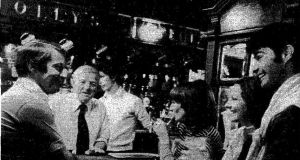 Over the years, the debate around pubs serving or not on Good Friday populated The Irish Times’ letters pages on an annual basis.

In 2018, pubs opened in Ireland on Good Friday for the first time in more than 90 years. Thus concluded the perennial conversation about whether or not it was justified - religiously, morally, culturally - to allow pubs to serve on an important day in the Catholic and Christian calendar. This year, pubs are closed again, albeit for a much different reason.

Over the years, the debate around pubs serving or not on Good Friday populated The Irish Times’ letters pages on an annual basis. But those weren’t the only discussions happening about our cultural relationship with alcohol and the importance of the pub as a community hub, or the importance of positioning it as such for the benefit of publicans.

On June 25th, 1981, The Irish Times ran a special report imaginatively titled, Drink. “In the eyes of many foreigners and quite a few natives too, drink and the Irish go together like gin and tonic,” one article in the spread began. “There is really no doubt that as a nation, we do have a reputation abroad for being accomplished swillers of beer, and sinkers of spirits.”

Another article was headlined ‘A thousand reasons for pub’s peculiar popularity’. “Pubs have long played an integral part in Irish life, and in the lives of tourists for as long as they stay in the country. Despite the fact that they lack many of the comforts of home, and some of them lack comforts of any kind, they are more often than not thronged with drinkers busily keeping the brewing and distilling industries in this country on their feet… Perhaps pubs are popular because they become a way of life for many people at a reasonably young age, though not necessarily because they drink there. One prominent Dublin publican believes that young people gravitate naturally towards pubs in the evening because they are so used to going there for sandwiches and soup at lunchtime.”

As befits the era, the page was crowded with alcohol advertising. There’s an ad for Cointreau, another for Savage Smyth (a brand of tonic, with a slightly unfortunate ‘SS’ logo), and a patriotic call to arms regarding local whiskey, “Few people realise that whiskey distilling began in Ireland over a thousand years ago. Since then many others have tried to match the taste and quality of Irish whiskey, but none has succeeded. Today, Irish whiskey is appreciated for its smoothness, tradition and character. And it is yours to enjoy with pride. So make the choice. Raise your own spirits. Irish was the first whiskey. It still is.”

Tucked in the corner is the little can that could, an ad for Corcoran’s fizzy orange. Corcoran’s of Carlow made several products, including Castle Lemonade, Castle Cola, and the Carlo Orange brand. Soft drinks and mineral water manufacturing and bottling was a solid business in Carlow for generations. Thomas Corcoran opened a mineral water factory in Carlow in 1827, using natural water from a well next to Carlow Castle. Red lemonade is an Irish curiosity, but even more so was Corcoran’s brown lemonade. Corcoran’s was indeed a behemoth in regional Irish soft drinks, although McDaid’s Football Special stands out in the class of curious Irish minerals - which includes Cidona, TK red lemonade, Tanora - as one of the most unique, originally made in Ramelton in Donegal. McDaid’s banana flavour is also popular.

But so well-regarded were Corcoran’s drinks that when the Irish International Exhibition world fair was held in Dublin in 1907, Corcoran’s products featured. That exhibition also featured an imported Canadian water chute amusement ride which cost the organisers £3,000 to bring in, yet made £7,000 from punters, its second ever highest revenue at the time.  While these local tipples may feel like a thing of the past, small producers of craft beers in Ireland are thriving, and non-alcoholic drinks get a look in too, particularly fermented drinks such as kombucha and kefir. KO kombucha, SynerChi, King of Kefir, and Blakes Always Organic Kefir are just a few well-thought-of brands in contemporary Ireland.