Blackout 1939: When Ireland’s citizens were asked to pull together in crisis 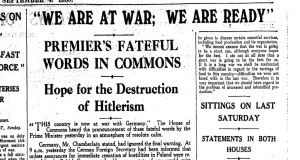 On September 4th 1939, The Irish Times carried a story that had been anticipated. The news of the day dominated the top-right hand corner of page three. The headline shouted: “WE ARE AT WAR; WE ARE READY.”

The story, of course, was of Britain’s declaration of war on Germany the previous evening, following Hitler’s invasion of Poland and a subsequent ultimatum issued by the prime minister.

That particular issue of The Irish Times must have been a busy one to put together. The edition is packed, with much more home news than one would expect to see in that era.

On page 10, alongside reports concerning Irish neutrality, is the report from the All-Ireland hurling final, which also took place the day before.

Under heavy thunderstorms, Kilkenny won the title - their twelfth - after getting “the last swing of fortune’s pendulum” and scoring a last minute point to win 2-7 3-3. The storm through which the teams played was “violent” and in some areas, roadways had been torn up.

A couple of columns over from the biggest story on page three is another which illuminates the effects of The Emergency as they were felt by the people of Ireland: dealing with the “blackout” - that is, the practice of minimising the amount of exposed light at night-time, for the purpose of hiding from any warplanes that may fly over-head.

After dark, buses were supposed to run without interior lighting. Cars were directed to use sidelights only and traffic was to move slowly. Businesses were to have their windows covered and demand for blackout curtains soared.

The measures required widespread participation. As you might have guessed, not everybody played ball that first weekend, and no small amount of mischief occurred: “The blackout in Sligo caused much confusion and dislocation of trade on Saturday night. In the darkness groups of irresponsible youths used the conditions as an opportunity for buffoonery and unseemly antics, and it is apparent to the bulk of the traders and shoppers here that should the continued blackout be necessary the local police will have to be augmented or a system of curfew imposed.”

A similar story, the day before on September 3rd (a rare Sunday edition - the first in about 25 years at that time), revealed that the blackout was not adhered to equally over the country on Saturday, as teased by the headline: “Black-out that was not; trams and ‘bus lights as usual’.”

The report said that while the capital tried to hold a complete blackout, the attempt ‘was a failure’. Buses were lit up and many buildings were inadequately shuttered. Leinster House, for one, “was described as being a blaze of light”.

A plane belonging to the Defence Forces circled Dublin to see the effect of the blackout from above. In one case, it flew low over a house that didn’t seem to take the hint. The Irish Times reported: “At Mount Merrion, a large house displayed a number of unshuttered lights. Two large bay windows lay wide open and brilliant light streamed through on to the lawn outside. The aeroplane swooped very low over this house and began circling over the building, switching on and off its navigation lights.

“After a time the residents of the house, who had assembled in the garden, realised that the ‘plane was signalling them to screen the lights. They then proceeded to draw their shutters and blinds.”

In Dublin on Sunday night, there was not much talk of war. The suburbs were in darkness, with windows heavily curtained. Every fifth lamp was lit on O’Connell street. The roads were wet, and nervous drivers in motor cars and buses “groped their way slowly by the faint light of their parking lamps”.

“For all these evil omens, however, there was little talk of the war,” wrote an Irish Times reporter.

“People had been going their lawful and normal occasions all the evening, just as if nothing had happened, and as if all was still well with the world. Young men and girls poured out of the cinemas in their usual Sunday night thousands, but most of them were discussing the picture. One young woman said that she never liked ‘that fella Pat O’Brien’. He was too rough. Someone else thought another picture was ‘lov-ely’...”

Overall, it appeared the measures were quite widely observed, according to the newspapers. An Irishman’s Diary postscript said that the blackout improved night-on-night that first weekend, “but, as before, there were any number of motorists whose lights were less dim than their wits”.

On the topic of motorists, something of an ironic court report appeared in September 5th’s edition; a number of drivers had been summoned at Shankill District Court for not having lights on their cars. The judge remarked that the next court would probably see gardaí prosecuting motorists for actually having those same lights on their cars.

Another feature of the editions of The Irish Times during the first days of September 1939 is the increase in space bought by opportune advertisers. One such ad for G D Grannell contractors on September 3rd says: “If war comes to Ireland be prepared by consulting us about your air raid shelter.”

The bottom of the copy proudly reads: “The First in Ireland to Advertise Air Raid Shelters.”

Directly beneath that, O’Reilly & Co of North Earl Street promises an abundant stock of fairly-priced blankets, “war or no war”.

More than 1,000 people - many women with children - reached Cork on Sunday afternoon and were met by friends and relatives. Travellers reported long delays to trains in darkened stations in England.

In Killarney on Saturday, where there was “almost 100 per cent co-operation from the public” during the blackout, hundreds of Irish people arrived from London on late trains, some having travelled for 27 hours.

“When the tired travellers alighted on the platform,” reads one report, “there was a scramble for luggage, most of which was without labels.” Some gave vivid descriptions of “the exodus from London” and the scenes at Paddington Station, which was “stormed by thousands of Irish people anxious to leave”. One woman, who had undertaken the trip, remarked: “I do not know how I got into my train alive. I would not like to go through it all again.”

The same night, a ship from Liverpool arrived in Dublin five hours late. In the darkness and confusion, two people fell overboard: Mary Collier from Co Louth went into the water after a “fainting fit”, while Mr W Glass of Kimmage fell from the same vessel. Both were rescued and treated in hospital.

On Tuesday night, Sean Moylan, parliamentary secretary to the minister for defence, took to the airwaves to thank citizens for their efforts, and to ask members of the public to further adhere to the emergency measures amid the developing crisis: “In appealing for the co-operation of the citizens for their own protection, I am happy in the knowledge that I am appealing to people whose courage has never been a matter of doubt with me, and of whose unselfishness and thought for the neighbour in distress I have had ample proof.”

You can read the full edition from September 4th, 1939, here.