Coveney hopeful of new government by mid-June, he tells Irish in New York 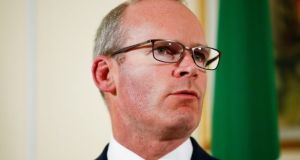 Tánaiste Simon Coveney expressed solidarity with those living in New York – the epicentre of the US coronavirus pandemic which has claimed more than 26,000 lives in the state.

Tánaiste Simon Coveney has said he hopes that a government is in place by the middle of June, as Ireland moves to a post-covid economy.

Speaking on a conference call with members of the Irish community in New York on Wednesday evening, the Minister for Foreign Affairs highlighted the need for the government to have a “legitimacy and a majority” to make the decisions needed for the country.

“Hopefully a new government can be in place by the middle of June to provide some certainty for Irish people as to the next phase, which is a post-Covid Ireland, because the current government is effectively running the country with 35 people in parliament,” he said. “That’s not sustainable for much longer in terms of the enormity of the decisions that we’re making for the country.”

He continued: “We need both legitimacy and a majority in parliament – in the Dáil and Seanad - to be able to deliver with authority, which is what’s desperately needed in Irish politics now - a government that can make decisions for people in a way that doesn’t get undermined or delayed because of the lack of a majority or a lack of a perceived mandate.”

Mr Coveney expressed solidarity with those living in New York – the epicentre of the US coronavirus pandemic which has claimed more than 26,000 lives in the state.

“The overriding message that I want to give is that we’re with you as an Irish community, we’re suffering together. We have faced enormous tragedy and challenge at home just as many of you have in New York,” he said, noting the difficulties for Irish people living in the United States who can’t travel to Ireland to be with their families.

Dozens of people from the Irish community, including representatives from Glucksman Ireland House and the Aisling Irish Community Centre in New York, participated in the call which was hosted by the Irish consulate in New York.

Responding to questions about the visa status facing many Irish workers and residents in the United States, Mr Coveney said he had noticed that the issue of immigration and visa provision had arisen in the context of Covid-19.

“I really hope that there isn’t an anti-immigrant sentiment developing,” he said.

He also addressed recent comments by US President Donald Trump that he could look to repatriate US companies manufacturing abroad, including in Ireland, amid heightened awareness in the US of the global supply chains that underpin the pharmaceutical and medical device industries.

“[WE] need to reassure people around the United States that Ireland is a hugely reliable part of the supply chain into the US,” he said, noting the number of Irish companies with operations in the United States.