Tender for up to 800 all-electric double decker buses published 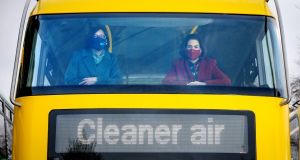 Minister of State for Transport Hildegarde Naughton (right), with Anne Graham, chief executive of the National Transport Authority, at the launch of the first of 100 double-decker electric hybrid buses destined for use by Dublin Bus and in Galway by Bus Éireann. Photograph: Crispin Rodwell

A tender for up to 800, battery-powered, double-decker buses has been published on the Government’s e-tenders website.

The buses are intended for use on urban bus routes in the State’s major cities, as well as on some town bus services. The exterior of the buses will feature the green, yellow and white Transport for Ireland livery and have a minimum of 41 seats upstairs and 19 downstairs.

The request for electric buses follows a similar tender published last July for up to 600 double-decker, hybrid buses.

Both tenders were published by the National Transport Authority (NTA) which is moving State-owned, urban buses to low emission vehicles, as provided for in the Government’s Project Ireland 2040 and the Climate Action plans.

The latest tender for electric double deckers seeks a “framework agreement” over a period of five years, with the first buses expected to arrive in the second half of 2022.

The all-electric buses will meet the relevant definition of a “zero emission vehicle” in line with the EU definition of clean and energy-efficient road transport vehicles which is expected to come into force in late 2021.

The proposed battery-powered electric vehicles will operate with zero tailpipe-emissions, which is expected to contribute to a substantial improvement in air quality in cities and towns. Minister for Transport Eamon Ryan said “by providing more accessible and sustainable methods of public transport we will reduce the need for personal vehicles, making the quality of the air we breathe healthier for everyone”.

Anne Graham, chief executive officer of the NTA, said the transition to a zero-emission bus fleet was a central component of the BusConnects project. She said the procurement of these battery-powered electric buses represents a key milestone in that process.

Expressions of interest in the tender are required by February 12th, 2021.