‘It’s a no-brainer,’ says student who availed of accredited work experience in school 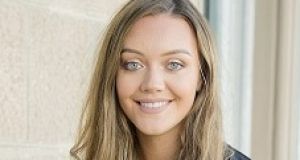 Aimee Steven had been thinking of going to university until she tried a new foundation apprenticeship in her final year of secondary school.

Aimee Stephen had been thinking of going to university until she tried a new foundation apprenticeship in her final year of secondary school.

“I prefer learning in a practical, hands-on kind of way,” says Stephen, from Moray in Scotland, who did a business skills apprenticeship.

“ Initially, it meant gettiing out of school every Wednesday... it was much more interesting than listening to a teacher. I was in in college one day a week for six months, and the other six months was on work placement.

“I got to do problem-solving, dealing with spreadsheets, databases and work on my communication skills... I loved it.”

Stephen’s experience well end up happening in Irish schools under reforms being considered as part of a major review of the senior cycle.

A draft advisory report by the National Council for Curriculum and Assessment is understood to acknowledge criticism that the Leaving Cert is too narrow and resembles an entance exam for third level.

The “points culture”, it says, is seen by many as narrowing students’ focus to the detriment of alternative pathways such as further education or apprenticeships.

This is happening at a time when there is growing recognition of the kind of skills which are required to be successful in third level and life beyond school, such as critical thinking, independent learning, communication/presentation and teamwork skills.

Much of the feedback in the consultations in the senior cycle review has focused on the need to develop new vocational pathways and - crucially - for these have equal status with more traditional subject choices.

One option under consideration is to include “off-site” learning during the senior cycle where students could study in further education colleges and complete accredited work experience.

These courses could be in a range of areas ranging from engineering, ICT, care, life science, finance and business.

The idea is they would count for Leaving Cert points in the same way as regular subjects.

The concept is loosely modelled on changes to the education system in Scotland, where schools have introduced access for senior cycle students to a range of skills-based qualifications in growth industry sectors.

It generally involves one day off school where a student is based in the workplace or a college for one day a week.

These qualification are recognised in the equivalent of the Leaving Cert in Scotland and may count as one or more subjects for access to many university programmes.

Most European countries also offer a range of vocational pathways within their education systems at second level. Ireland, however,, is unusual in not having this kind of approach.

While there are vocational options - such as the Leaving Cert Applied and Leaving Cert Vocational Programme - they are widely seen as suffering from a status problem and limiting students options.

It may be one reason why Ireland has the highest progression rate to third level in the EU - and one of the lowest into apprenticeships and other vocational options.

A recent review of the senior cycle by the OECD found that many stakeholders expressed concern about not having a more rigorous and attractive vocational segment in senior cycle, especially one that gives real work-based experience to students.

Solas, the umbrella body for the further education and training sector, is an enthusiastic supporter of expanding pathways for students to vocational options.

Andrew Brownlee, head of Solas, said a key barrier for students is that many do not get any exposure to vocational learning in school.

“International approaches suggest a potential role for Fet [further education and training] in offering modules and tasters of vocational courses to second-level students where existing teaching resources do not have the required technical experience available,” he said.

The reforms being floated offer an exciting change for students to complete modules as an integrated part of the senior cycle alongside other options and components.

As for Aimee Steven, she is delighted she had the opportunity to try her hand at a foundation apprenticeship while in school.

Instead of gonig to university, she says it opened her eyes to the world of modern apprenticeships where students can gain degrees while working.

She has since secured employment as an employer and school liaison assistant with DWY Moray and is completing a business degree as part of a graduate apprenticeship.

“It’s allowed me to work, earn money, study and get a degree, with no univertsity debt. It’s a no-brainer in my eyes,” she says.